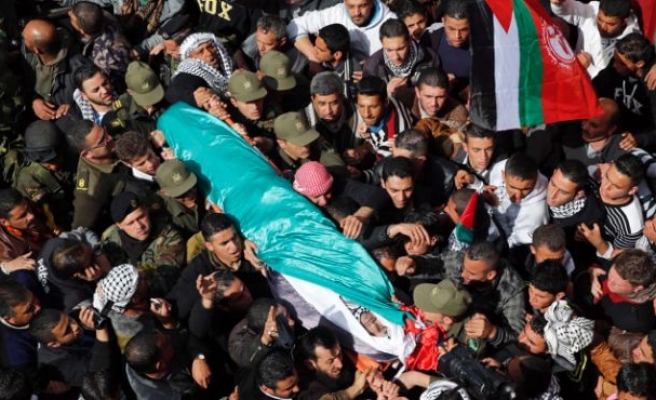 Thousands of Palestinians in the occupied West Bank staged a popular funeral on Sunday afternoon for a young man who was shot dead during a dawn raid by Israeli forces in the northern Nablus city.

Mourners held Palestinian flags and shouted slogans against Israeli occupation as they laid the young man's body to rest in the cemetery of Al-Ain refugee camp where he used to live.

The man had sustained four gunshot wounds to the chest as Israeli forces attacked the western Al-Ain refugee camp and other parts of the West Bank in search for three Jewish settlers whom Israel said were kidnapped from a settlement block near the West Bank city of Hebron earlier this month.

Another man was found dead in a building entrance following a raid in a central Ramallah district.

Scores of Palestinians have also been injured in clashes with Israeli forces during the raids.

Tensions in the Palestinian territories have run high since three settlers went missing from the Jewish-only Gush Etzion settlement bloc, located near the southern West Bank city of Hebron.

A number of those who have been arrested were released hours later, according to the society's statement.

Most of those who have been arrested were taken from the northern West Bank cities of Hebron, Bethlehem and Jenin, the release said.

Around 5270 Palestinians, including 191 "administrative" detainees, continue to languish in jails throughout the self-proclaimed Jewish state, according to earlier reports by the Palestinian Prisoners' Society.