They carried black-and-white banners which read "There is only one God and Mohammad is his messenger." 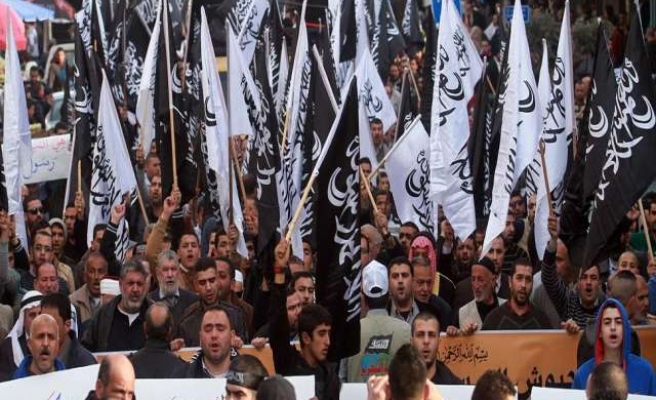 Thousands of Palestinians rallied in the occupied West Bank on Saturday to protest against the publication of cartoons depicting the Prophet Mohammad in French satirical weekly Charlie Hebdo.

Simultaneous demonstrations were held in the cities of Ramallah and Hebron less than three weeks after gunmen shot dead 12 people in the Paris office of Charlie Hebdo, which has repeatedly featured cartoons of the Prophet Mohammad.

The magazine returned to the newsstands the following week with a cartoon of the prophet on its front page.

The protests were called by the Tahrir Party, which advocates the establishment of a "caliphate" in Muslim countries.

"We have taken to the streets in order to demand Muslim armies act the way France and the West deserve in response to the repeated offences against the Prophet, peace be upon him," said Baher Saleh, a member of the party.

In the wake of the Paris killings, the Western-backed Palestinian president, Mahmoud Abbas, marched in Paris alongside dozens of world leaders, including Israeli Prime Minister Benjamin Netanyahu, at a memorial rally for the dead.