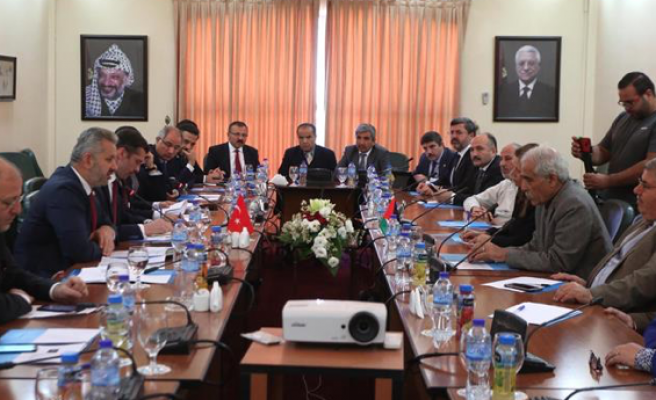 A group of 22 Turkish lawmakers on Saturday visited the Palestinian Legislative Council in the West Bank city of Ramallah.

The visit by the lawmakers, who are members of the Turkey-Palestine Interparliamentary Friendship Group, came to support Palestinians and their right to establish an independent state as well as backing their national unity.

The Turkish deputies consisted of 20 MPs from the Justice and Development (AK) Party, and one each from the Republican People’s (CHP) Party and Nationalist Movement Party (MHP).

They held meetings with Palestinian parliamentarian from different parties -- including Fatah and Hamas -- to discuss bilateral relations and recent developments.

Ibrahim Abu Naja, a Palestinian parliamentarian, briefed the Turkish lawmakers on the status of Palestinian prisoners in Israel and what he described as illegal Israeli settlement activities and violations at Al Aqsa Mosque.

He also praised the Turkish role in highlighting the Palestinian cause on international level.

The ruling Justice and Development Party's deputy Hasan Turan asserted that Turkey would continue to support the creation of an independent Palestinian state with Jerusalem as its capital.

He also voiced Turkey’s support for unification of all Palestinian groups in order to form a strong national unity structure.