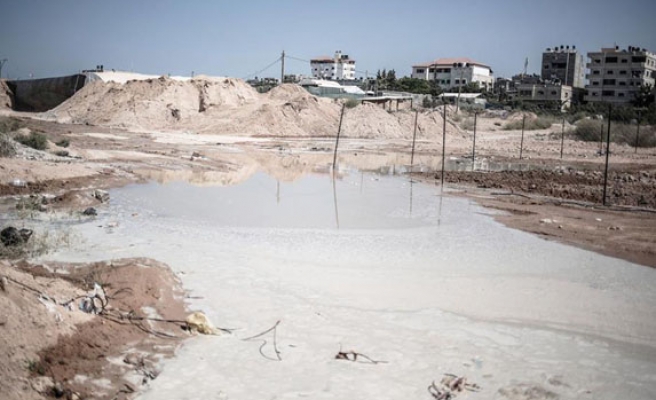 The Egyptian army said Sunday it had destroyed the entrances of two dozen cross-border tunnels in a fresh crackdown last month on a network of subterranean passages linking Egypt’s Sinai Peninsula with the Hamas-run Gaza Strip.

In a statement, army spokesman Brigadier-General Mohamed Samir said the entrances of 31 cross-border tunnels had been destroyed in the North Sinai city of Rafah over the course of October.

Samir also posted photos of tunnel openings that he said had been destroyed by the Egyptian border authorities.

Blockaded by both Israel and Egypt since 2007, the Palestinian Gaza Strip had relied on the network of tunnels for years to import desperately-needed supplies, including food, fuel and medicine.

Since the 2013 ouster of elected President Mohamed Morsi by the military, however, the Egyptian army has done its best to find and destroy the cross-border tunnels, which, it says, are used to support militant activity in Sinai.

In September, the Egyptian army went so far as to begin flooding the tunnel network with water from the Mediterranean Sea.

Last year, the Egyptian authorities began setting up a "buffer zone" along the border with Gaza following a spate of militant attacks on Egyptian security personnel deployed in the volatile Sinai Peninsula.

In a related development, Ismail Haniyah, deputy head of Hamas’ political bureau, held the Egyptian authorities "fully responsible" for the death of a Palestinian fisherman who was shot dead by Egyptian troops off the coast of the southern Gaza Strip last Thursday.

"This incident… is a blatant assault on the values, history and longstanding ties of brotherhood [between the Palestinians and] the Egyptian people," Haniyeh told reporters on Saturday evening while delivering his condolences to members of the slain fisherman’s family.

"The Egyptian authorities hold full responsibility for this unacceptable act," he added.

Haniyah went on to urge Egypt’s leadership not to contribute to the ongoing suffering of the Gaza Strip’s roughly 1.9 million inhabitants by sealing the Egypt-Gaza Rafah border crossing, flooding the network of cross-border tunnels, and opening fire on Gazan fishermen.

He also stressed the commitment of Hamas -- which since 2007 has governed the blockaded Gaza Strip -- to ensuring Egypt’s national security.

"It’s true our anger is great; but this does not change our target," he asserted. "Our guns remain pointed at the Israeli enemy."

The Palestinian Fishermen’s Association, for its part, has called on the Egyptian authorities to open an urgent investigation into the fisherman’s death, who, it asserted, had merely been "doing his job as a fisherman in Palestinian waters" when he was killed.

The fisherman, Firas Mekdad, was shot dead Thursday off the coast of Rafah by Egyptian army troops, according to both witnesses and local medical sources.

According to the fishermen's association, the Egyptian army typically arrests -- or shoots at -- anyone who approaches Egypt’s maritime borders.

The Egyptian authorities, for their part, have refrained until now from commenting on Mekdad’s death.