Ban says his emergency visit, announced only hours before his arrival, 'reflects the sense of global alarm at the dangerous escalation in violence between Israelis and Palestinians' 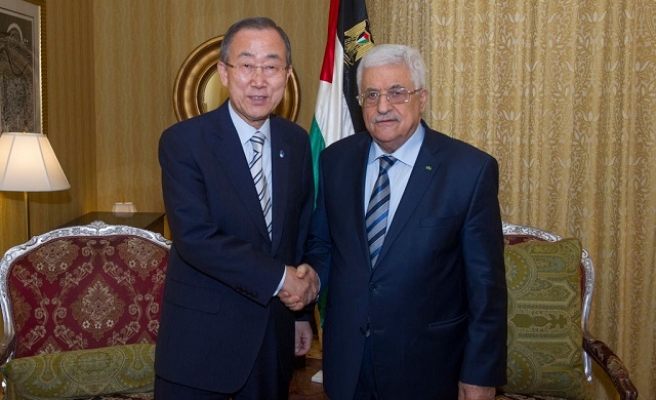 UN chief Ban Ki-moon meets Palestinian president Mahmud Abbas on Wednesday after talks with Israeli leaders, warning both sides to back away from a "dangerous escalation" in violence threatening a full-scale uprising.

Ban on Tuesday said his emergency visit, announced only hours before his arrival, "reflects the sense of global alarm at the dangerous escalation in violence between Israelis and Palestinians."

He urged both Israelis and Palestinians to take every step possible to avoid falling into a "dangerous abyss".

"Beyond the immediate tensions, what is missing is the resolve to restore a political horizon for talks, and a political process that delivers real results and peace," he said.

As he stood next to Ban, however, Netanyahu argued sternly against suggestions that Israel's continued occupation, long-stalled peace efforts and Jewish settlement building had led to the current unrest.

"I believe it is time to tell the truth about the causes of Palestinian terrorism," he said.

"It is not the settlements, it is not the peace process, it is the desire to destroy the state of Israel pure and simple."

With international concern increasing, US Secretary of State John Kerry will also meet Netanyahu later this week in Germany as well as Abbas and Jordan's King Abdullah at an unspecified location in the Middle East.

Three weeks of attacks and unrest meanwhile continued even as Ban arrived for his two-day visit.

In the latest attack, a woman was shot and wounded after allegedly approaching an Israeli settlement with a knife on Wednesday morning.

On Tuesday, another stabbing and a car attack occurred in the occupied West Bank, wounding three Israelis. Both alleged attackers were shot dead.

Israeli troops also shot dead two Palestinians in a stabbing attack on their post in the West Bank city of Hebron on Tuesday night in which one soldier was slightly wounded.

- Warning over misuse of force -

More than 40 Palestinians have been killed in the upsurge in violence that began at the start of the month, including alleged attackers. Eight Israelis have died in attacks.

Many of the attackers have been young Palestinians who appear to be acting alone, making it hard for Israeli authorities to counter. Most incidents have seen the attackers stab Israelis before being shot dead.

Ban acknowledged the security challenges for Israel and the fears of residents facing a wave of gun, knife and car-ramming attacks.

He said he was "deeply troubled by statements from Palestinian militant groups including Hamas and Islamic Jihad praising such heinous attacks."

At the same time, he warned against overzealous security measures that could exacerbate tensions, with Israel facing accusations of excessive force against Palestinians in the current wave of violence.

Videos that have spread online showing Israeli forces shooting alleged attackers have added to anger, with Palestinians seeing some of the shootings as unjustified.

The Israeli leader, however, placed full blame on the Palestinians.

Netanyahu has repeatedly accused Abbas of inciting violence by suggesting that Israel wants to change the status of the Al-Aqsa mosque compound in Jerusalem.

Muslims fear Israel will seek to change rules governing the site, known as the Temple Mount to Jews and located in Israeli-annexed east Jerusalem.

Jews are allowed to visit but not pray there to avoid provoking tensions, and Netanyahu has said repeatedly he has no intention of changing the rules.

Clashes between Israeli security forces and Palestinian protesters at the compound in September preceded the current wave of violence.

Ban has publicly proposed few concrete solutions for ending the unrest. Last week France suggested international observers could be deployed to the Al-Aqsa compound, a proposal immediately rejected by the Israeli leadership.

Kerry has spoken of clarifying the site's status but opposes the idea of international observers.

Ban will also visit families of both Israeli and Palestinian victims of the latest wave of violence.

"I deplore the random attacks against civilians. Such attacks make every place unsafe and every person, regardless of gender or age, a potential victim," he said on Tuesday night.

Later this week he is expected to meet King Abdullah of Jordan, who has previously acted as a mediator between different parties.