The United States said explicitly for the first time on Thursday it would veto a Palestinian bid for full U.N. membership, drawing an immediate rebuff from the Palestinians who vowed to press ahead. 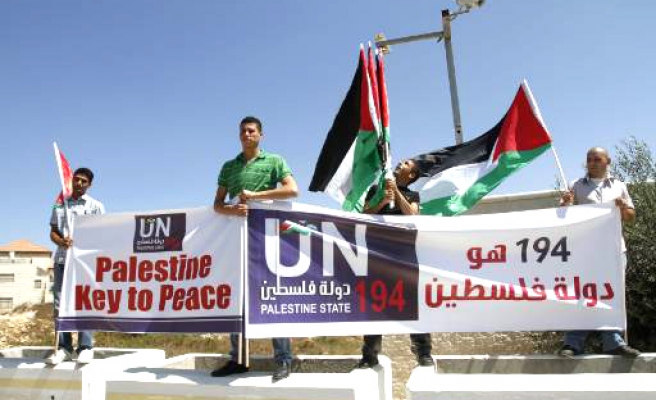 The United States said explicitly for the first time on Thursday it would veto a Palestinian bid for full U.N. membership, drawing an immediate rebuff from the Palestinians who vowed to press ahead.

Diplomats have said it is not clear what the Palestinians will do when the U.N. General Assembly opens on Sept. 19. They could seek lower status as a "non-member state," which would require a simple majority of the 193-nation Assembly.

"The U.S. opposes a move in New York by the Palestinians to try to establish a state that can only be achieved by negotiations," U.S. State Department spokeswoman Victoria Nuland told reporters at her daily briefing.

"So, yes, if something comes to a vote in the U.N. Security Council, the U.S. will veto."

Nuland's comments marked the first explicit veto threat by the United States, although U.S. officials have stressed for months their opposition to the Palestinians taking the bid to the United Nations.

In response, Nabil Abu Rdainah, a spokesman for Palestinian President Mahmoud Abbas, issued a statement saying: "We are going to the United Nations to request a full membership for Palestine in order to protect the rights of our Palestinian people and the concept of two-state solution."

The Palestinians on Thursday officially launched their campaign to join the United Nations as a full member state, saying they would stage a series of peaceful events in the run-up to the annual gathering of the U.N. General Assembly later this month.

Some 100 Palestinian officials and activists gathered at the U.N. offices in Ramallah for a short ceremony, where they announced their plans in a letter addressed to Secretary-General Ban Ki-moon.

The letter urges Ban to add his "moral voice in support of the Palestinian people."

"Families of the tens of thousands of victims of Israeli occupation, including those martyred, wounded and imprisoned, and countless others who were expelled from their homes or lost their homes and their property, hope that you will exert all possible efforts toward the achievement of the Palestinian people's just demands," it says.

The letter was handed over by Latifa Abu Hmeid, a 70-year-old woman who lost one son in fighting with Israel and has seven other sons in Israeli prisons because of alleged resistence activities.

Officials said Abu Hmeid was selected to deliver the document because her personal story reflects the plight of the Palestinians. A resident of a West Bank refugee camp, her house has been twice demolished by Israeli authorities as punishment for her sons' activities, they said.

The Palestinians have decided to turn to the U.N. to recognize their independence after two decades of unsuccessful peace efforts with Israel. The latest round of talks broke down a year ago.

The campaign seeks recognition of an independent Palestine in the West Bank, Gaza Strip and east Jerusalem - areas occupied by Israel in the 1967 Mideast war. Israel rejects a return to its 1967 lines.

The letter says the campaign will include a series of peaceful events "in various international cities and capitals" leading up to the Sept. 21 opening of the General Assembly. Two days later, Palestinian President Mahmoud Abbas will address the gathering in New York and ask for admission to the United Nations.

It remains unclear whether the Palestinians will turn to the Security Council or the General Assembly.

The Council needs nine votes out of 15 and no veto from any of its permanent members to pass a decision. However, the United States, which opposes the Palestinian bid, is expected to veto any request in the Council.

The Palestinians could then seek admission as a "nonmember state" of the General Assembly, like the Vatican.

Approval in the Assembly, which is dominated by developing nations sympathetic to the Palestinians, is assured. But the vote would not be legally binding. The Palestinians say they will continue their campaign until they gain full U.N. membership.