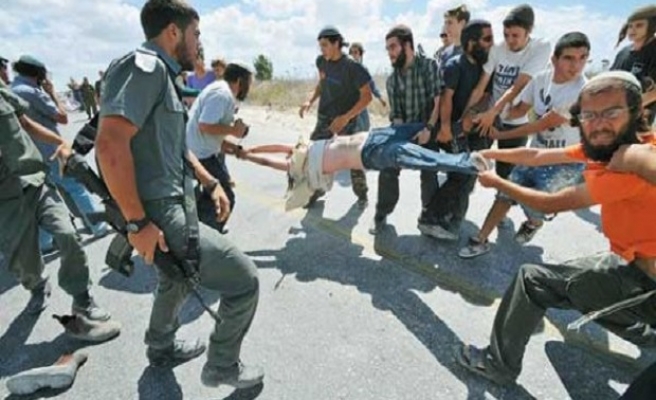 Hundreds of Jewish settlers on Friday attacked Palestinian villages and spray-painted anti-Arab phrases in a fresh spate of so-called “price-tag” attacks in the Israeli-occupied West Bank, according to eyewitnesses.

“Settlers torched a car in Beitillu village near Ramallah and spray-painted anti-Arab phrases,” another eyewitness said.

On Thursday night, hundreds of Jewish settlers attacked Palestinian vehicles after two Israeli settlers were killed near the Itamar settlement in the southern West Bank city of Nablus.

Ghassan Daghlas, the Palestinian Authority official in charge of settlement affairs, told Anadolu Agency that Jewish settlers -- under the protection of Israeli security forces -- had stormed the Palestinian villages of Burin and Hawara in the northern West Bank and torched dozens of acres of Palestinian farmland.

According to Daghlas, the Israeli army deployed forces both south and east of Nablus to protect the rampaging settlers.

Several "price-tag" attacks by Jewish settlers on Palestinian property and Muslim houses of worship have been reported recently in both Israel and the Israeli-occupied West Bank.

Such attacks have recently increased in frequency in both Israel and the West Bank.

On July 31, suspected Jewish settlers set fire to a Palestinian home in the West Bank, killing an 18-month-old child. Days later, the boy’s mother and father also succumbed to injuries sustained in the arson attack.