Conference brings together hundreds of journalists, academics and writers from around 60 countries around the world 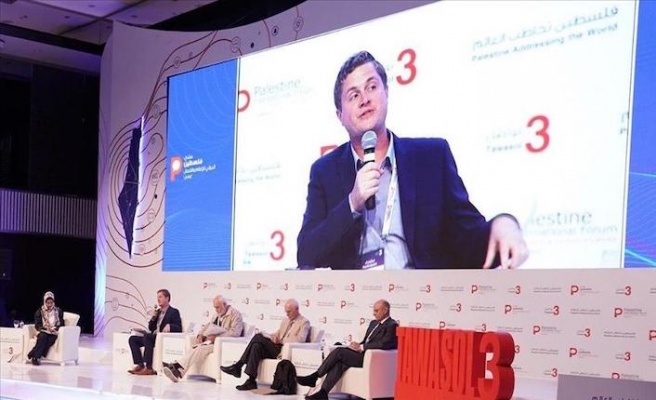 A major conference opened in the Turkish city of Istanbul on Saturday with a view to raising world awareness about the Palestinian cause.

Organized by the Beirut-based Palestine International Forum for Media and Communication, the two-day conference, themed “Palestine Addressing the World”, brings together hundreds of journalists, academics and writers from around 60 countries around the world.

“We are here in Istanbul to bring worldwide media organizations together to raise awareness about the Palestinian cause,” Bilal Khalil, director of the forum, told Anadolu Agency.

“Our big aim is to raise awareness on the universality of the Palestinian cause and create a networking platform for media professionals from all over the world,” he said.

He said around 700 reporters from 300 international press and media organizations are taking part in the conference.

Hisham Qassim, Secretary-General of the forum, said the conference aims to mobilize efforts of media people to defend the Palestinian cause.

“We are working to increase awareness regarding the Palestinian cause among the peoples from all over the world,” he said in his opening speech.

He said the meeting “gives an opportunity for the media and press people to meet and exchange their experiences with a view to understanding the Palestinian cause and spreading the truth of it.”

In his speech, Qassim decried ongoing Israeli violations against journalists and media organizations in the Palestinian territories, the latest of which was the bombing of the headquarters of Al-Aqsa television in the Gaza Strip.

Since late March, more than 200 Palestinians have been killed and thousands more injured by Israeli army fire during anti-occupation protests near border of the Gaza Strip.

According to its website, the forum says it aims at enhancing coordination between Arab and international media organizations to support the Palestinian cause by organizing media forums, specialized conferences, and training workshops, as well as coordinating media campaigns.