Zahar said Hamas would remain in charge of its own troops regardless of the latest deal and irrespective of who won national elections, that are slated for later this year. 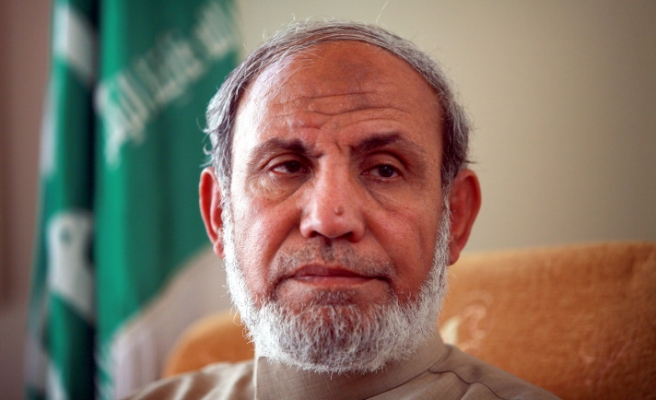 A Palestinian unity deal will not lead Hamas to recognise Israel's right to exist and will not result in any Gaza fighters coming under President Mahmoud Abbas's control, a senior Hamas official said on Tuesday.

Veteran Hamas strategist Mahmoud Al-Zahar told Reuters the group, which runs the Gaza Strip, was waiting for Abbas to form a unity government, but said the Palestinian leader was taking his time in an effort to overcome U.S. and Israeli opposition.

Hamas unexpectedly agreed with Abbas last week to lay aside old animosities and create a transitional cabinet paving the way to long-overdue elections across the Palestinian Territories.

The reconciliation accord angered Israel, which promptly suspended floundering peace talks with the Western-backed Abbas, saying it would not negotiate with any administration backed by Hamas.

Zahar, who is one of Hamas's most influential voices, said Abbas only decided to seek unity because the U.S.-driven negotiations were leading nowhere, but predicted he would take his time trying to assemble a government of technocrats.

"He is trying to overcome a great wave of pressure. We are waiting," said Zahar, adding that Hamas had already handed across lists of names of possible ministers.

Hamas's elder statesman, who has had spiky relations with the group's leadership, said Abbas was using the unity deal to put heat on Israel, but that he was also worried by a U.S. threat to suspend hundreds of millions of dollars in vital aid.

"He is seeking a guarantee that U.S. financial support will continue," Zahar said, speaking from his well-guarded house.

Looking to reassure Western allies, Abbas said the new government would recognise Israel and honour previous treaties. Zahar dismissed this as a hollow gesture, saying the ministers would be academics with no political authority.

"Abbas is not telling them the truth. He says 'this is my government'. But it is not his government. It is a government of national unity. He is marketing it in this way to minimize the pressure," said Zahar, who took part in the unity negotiations.

The unity pact follows a trail of previous, failed efforts to overcome the deep schism that has traumatised Palestinian politics. Agreed in just a few hours, it sidestepped one of the most sensitive issues - who would be in charge of security.

Hamas's armed wing has some 20,000 men in its ranks. Abbas has his own, Western-trained forces, that often cooperate with Israeli troops and police in the nearby West Bank - a practice that Zahar called "shameful".

Zahar said Hamas would remain in charge of its own troops regardless of the latest deal and irrespective of who won national elections, that are slated for later this year.

"Nobody will touch the security sections in Gaza. No one will be able to touch one person from the military group. Nobody asked for that," he said, sitting next to a photograph of one of two sons who were killed in Israeli attacks.

Hundreds of smuggling tunnels connecting Gaza to Egypt were destroyed, compounding an Israeli blockade on the Palestinian enclave, that restricts movement of goods and people.

Zahar said divisions in Egypt were a "catastrophe" for the region. He also acknowledged that once deep ties with Iran had not fully recovered after Hamas had refused to back Syrian President Bashar al-Assad in his on-going civil war.

"We have a good relation (with Iran), but you know the impact of the Syrian problem is still a factor. ... The communication is not as it was," he said, declining to give details of Iranian funding for Hamas.

Some political analysts said Hamas's international problems had spurred it towards reviving the reconciliation pact. But Zahar said Abbas, whose mandate expired five years ago, had made the overture because peace talks with Israel were at a dead end.

"He is very weak," said Zahar.

Sporadic rocket fire out of Gaza and into Israel picked up at the start of the year, amid mutual recriminations over who was to blame for the truce deal fraying.

However, Zahar said not all the missile attacks were sanctioned by Hamas, accusing some small groups of actively seeking to destabilise Gaza - including last week at the time the unity deal with Abbas was being concluded.