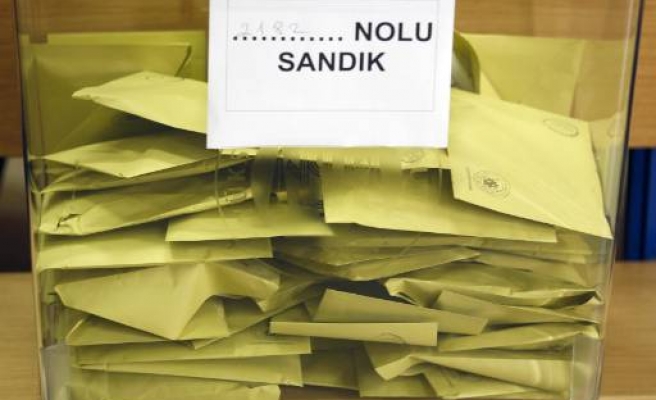 Following Prime Minister Recep Tayyip Erdoğan's proposal of two other alternatives to the current election system in place, which is part of the much-awaited democratization package which he announced on Monday, analysts believe a 5 percent national-level electoral threshold with smaller-sized constituencies would serve Turkey better, admitting however that the system would mostly work to the benefit of the biggest party, that is, the ruling Justice and Development Party (AK Party).

“A 5 percent threshold option is the most acceptable, suitable system for Turkey,” Ergun Özbudun, a professor of constitutional law at İstanbul Şehir University, told Today's Zaman.

Turkey currently uses a proportional election system with a party list also known as the d'Hondt system as opposed to plural-majority systems or semi-proportional systems. A 10 percent national election threshold was added to the present system to produce stronger parties and avoid fragmentation and instable governments. Calculation and vote distribution formula is also another factor in determining election results.

During the press meeting in which Erdoğan made public the democratization package, he proposed three options up for consideration by opposition parties. The first option, he said, is that the current electoral system with a 10 percent threshold will remain as it is. The second option is to reduce the national threshold to 5 percent, while at the same time reducing the size of district representation to five deputies only. As per the third alternative presented by Erdoğan, the election threshold is eliminated and a low magnitude district system is instituted.

Bekir Ağırdır, the director of the İstanbul-based Konda Research and Consultancy, also finds the 5 percent option the best choice for Turkey among the options, but believes it would even be better, in terms of producing a more balanced representation, to increase the size of the district representation to seven or nine instead of five.

As social consensus is lacking in Turkey even in some vital areas such as lifestyle, the election of a single deputy in a given electoral district -- the third alternative in Erdoğan's proposal -- may well serve to reduce the number of representativeness in Parliament, Ağırdır fears. In such a system, a candidate who obtains for example 25 percent of the vote could become elected to Parliament while votes cast for other candidates in the same electoral district would just be nullified and go to the trash can. “When the district size is seven or nine, it would allow a more inclusive representation,” he told Today's Zaman.

If a single-deputy district representation system without an election threshold is adopted, that would decrease the proportionality between the votes obtained in elections and deputies voted into Parliament, but would at the same time allow small parties to be represented in Parliament as they would have the opportunity to win elections in certain districts where their voters are concentrated.

The 5 percent threshold option is expected, by all accounts, to favor the strongest party -- the AK Party -- in electoral districts while working to the detriment of the Nationalist Movement Party (MHP), as the party's votes, which are usually not concentrated in certain provinces, are more or less evenly spread throughout the country.

In this system, the main opposition Republican People's Party (CHP) may suffer an insignificant loss -- a few deputies -- notes Seyfettin Gürsel, the director of Bahçeşehir University's Center for Economic and Social Research (BETAM). “But if the CHP increases its votes, then it would also benefit from the new system,” Gürsel commented to Today's Zaman.

The current electoral system with a 10 percent threshold has often been criticized for producing an unjust representation in favor of the AK Party in Parliament, but if the threshold is lowered to 5 percent, the ruling party may well have the opportunity, as per previous election results, to obtain a majority that would allow it to take an issue to referendum when needed, noted Gürsel, who has so far prepared five reports and a good many articles encouraging the government to overhaul the current electoral system.

Having obtained half of the vote in the previous general elections 2011, the AK Party currently has 326 deputies in Parliament, which doesn't allow the ruling party to bring an issue to referendum to receive approval from the public on issues which Parliament has denied as 330 yes-votes are needed for a referendum. “With the newly proposed system [with a 5 percent threshold], it's guaranteed that the AK Party will have more than 330 deputies with around 45-46 percent of the vote,” Gürsel said.

The pro-Kurdish Peace and Democracy Party (BDP) is expected not to be greatly affected by an overhaul in the electoral system as its votes are hugely concentrated in Turkey's Southeast. Although Gülten Kışanak, the co-chair of the BDP, has criticized Erdoğan's proposals regarding the electoral system, saying the election threshold should be completely done away with, the newly offered system would pave the way for the BDP to have proper representation with possibly more than 30 deputies in Parliament.

Main opposition CHP leader Kemal Kılıçdaroğlu has called on the government to drop the election threshold down to 3 percent. "Bring a 3-percent threshold proposal to Parliament, let's pass it," he said at a press conference on Tuesday. But Erdoğan has declined Kılıçdaroğlu's proposal, saying the proposed threshold has been determined after taking the pulse of the public.

Mustafa Destici, the leader of the Grand Unity Party (BBP), an opposition party which is out of Parliament, has called on the government to totally eliminate the election threshold, maintaining that the threshold is itself not a guarantee for political stability.

Erdoğan said at the press meeting that the ruling party would, following discussions on the benefits of the various electoral systems, take a bill to Parliament in the coming period.