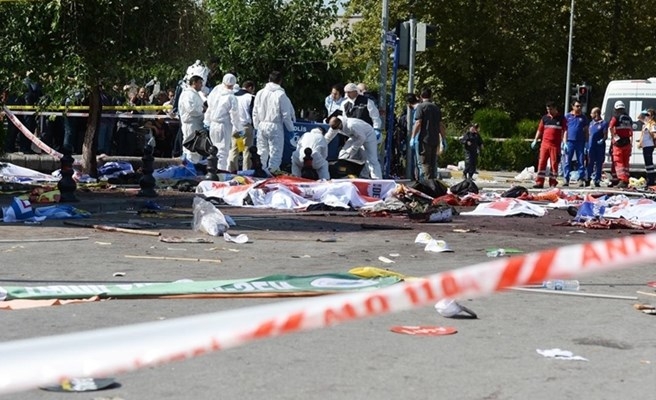 At least 95 people have been killed and 246 others wounded in Saturday's twin bombings that targeted a peace rally in Turkish capital Ankara, the prime minister’s office has said.

Fifty-two of those who were killed have been identified, it added.

Although the identity of the culprits remains unknown, Davutoglu -- speaking on Saturday evening -- said there are "very strong signs" the Ankara blasts were carried out by two suicide bombers.

Security officials based in the capital -- and who did not wish to be identified -- have told Anadolu Agency that the attack was carried out by two suicide bombers using TNT explosives, with metal balls added to make projectiles.

Police say they have found body parts belonging to the two apparent bombers and are working on identifying them. The authorities are also checking security camera footage from the area.

The Ankara officials also said the method of the attack and the amount of explosives used resemble the deadly Suruc bombing from July 20 this year. Dozens of people were killed in the southern Turkish town when a bomb blast struck a gathering of pro-Kurdish activists.

Health Minister Mehmet Muezzinoglu revealed the updated casualty figures at a news conference at the prime minister’s office in Ankara hours after the attack.

“At the scene, 62 people were killed and 24 succumbed to death in hospital,” he said. “Twenty-four people were severely injured.”

Of the 186 injured, Muezzinoglu said 28 were in intensive care units and 18 were currently undergoing surgery.

The number of dead makes the attack the deadliest in recent Turkish history.

The attack outside Ankara’s main train station targeted those gathering to attend a lunchtime demonstration to call for an end to the renewed conflict between the PKK terrorist organization and the Turkish state.

Approximately 14,000 people are understood to have been in the area at the time of the explosions.

A video on social media showed a ring of young people dancing and singing before an orange blast erupted in the background.

Following the attack, for which no group has claimed responsibility, bodies lay in front of the station on Hipodrom Street and paramedics tended to the injured as a police helicopter circled overhead.

Police later warned people to disperse over concerns of further explosions as rally organizers made pleas over loudhailers for people to give blood, an Anadolu Agency correspondent at the scene said.

The crisis desk at the president’s office later said the Turkish Red Crescent had not issued an appeal for blood donations.

Protest banners and flags littered the ground and members of the public helped carry the injured to ambulances and buses to take them to hospital.

Emergency services had raced to the scene following the explosions at 10.05 a.m. local time (0705GMT).

The health ministry said 56 ambulances and five air ambulance helicopters were sent to the scene of the blast. All of the capital’s hospitals have been treating the victims.

The blast area was quickly closed as police began their investigation.

People had gathered outside the station for a demonstration to be held in nearby Sihhiye Square, according to police. The rally, organized by the Confederation of Public Sector Trades' Unions (KESK), was to call for an end to the conflict between the PKK terrorist organization and the Turkish state.

Eye-witnesses said there were two consecutive blasts within seconds -- later confirmed by the interior ministry -- and there was an unconfirmed report that at least one suicide bomber was responsible.

The attack was carried out before the crowd reached Sihhiye Square, where police had established a security cordon.

Condolences and condemnation have flooded into Turkey in the aftermath of Saturday's outrage.

Turkish trade unions, including DISK, KESK, TMMOB and TTB, have announced a 3-day strike in protest.

Demonstrations in other major Turkish cities, including Istanbul, Izmir and Eskisehir, were called for Saturday night.

In addition, a one-minute silence will be held ahead of kick-off in tonight's UEFA European Championship qualifier game between the Czech Republic and Turkey.

Train services were delayed at the train station after the blast, Turkish State Railways said. Several windows of the station were shattered by the force of the blasts.

The blast occurred amid renewed violence between the PKK and the Turkish state. Turkey is preparing for a general election on Nov. 1 to break the political deadlock that resulted from June's election, which was marred by violence including a bomb attack on a Peoples' Democratic Party rally that killed four people.