When Ankara sent the request to the Egyptian side, saying they are ready to meet with the Egyptian administration after meeting Morsi 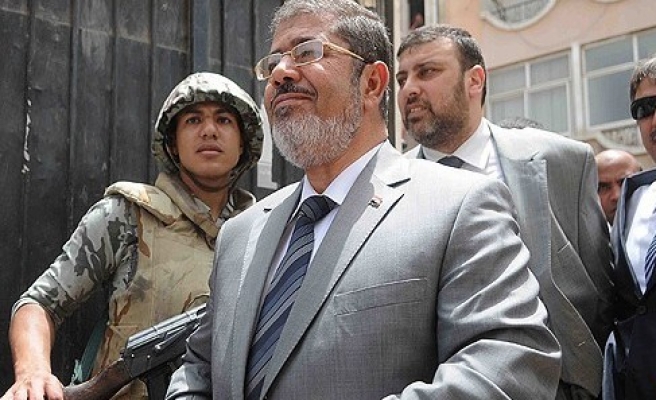 Turkey had asked Egypt’s military-backed government to pave the way for Foreign Minister Ahmet Davutoglu to meet with deposed Egyptian leader, Mohammed Morsi, in return for Ankara building ties with the coup administration in Cairo but the offer was turned down.

Diplomatic sources speaking to Today’s Zaman said Ankara would accept meeting with the military-backed government in the most populous Arab state, with whom Turkey has nearly broken all diplomatic ties since a military coup deposed Morsi in July 3, on the condition of being able to visit Morsi.

When Ankara sent the request to the Egyptian side, saying they are ready to meet with the Egyptian administration after meeting Morsi, the military-backed government said they welcomed a visit by Davutoglu to Egypt but cannot allow the Turkish foreign minister to have a meeting with Morsi.

According to the sources, Turkish Ambassador to Egypt Huseyin Avni Botsalı made the offer to the Egyptian side, making it seem as though it was his own idea to test the waters in the Egyptian capital.

“We would be glad to have Davutoglu visit. [Egypt] is your second home. However, it impossible to [arrange] a meeting with Morsi,” Egyptian sources told Botsalı.

Morsi has been detained incommunicado while the Muslim Brotherhood was banned from operating by an Egyptian court last month. Egypt’s authorities say Morsi is being investigated for charges including murder, stemming from a 2011 jailbreak when he escaped detention during protests against former president Hosni Mubarak.

Since the coup took place in July, Ankara has taken the side of the Muslim Brotherhood, from which Morsi hails, and their demonstrations, arguing that what took place in Egypt was a coup, contrary to the other countries which refrained from calling it as such. However, Turkey found itself alone in strongly condemning the ouster of Morsi and calling on the Egyptian military to restore the democratically elected government. Harsh condemnation of the military-backed government in Egypt strained ties and a tit-for-tat spat grew between Egypt and Turkey.

Ankara’s condition to meet with Morsi as a precondition to mending ties with the Egyptian government can be another sign of a thaw in strained ties. Top Turkish government officials have, for some time now, dropped their harsh rhetoric towards Cairo though still mentioning the political impasse in the Arab country. Pundits interpret the softening in Ankara’s rhetoric as a move to revive diplomatic channels.

In mid-September, Turkey sent Botsalı back to Cairo. Botsalı was recalled to Ankara for consultations in mid-August in protest of a military crackdown on two anti-coup protest camps in Cairo on Aug. 14 that left hundreds of Egyptians dead. In response, Egypt also immediately recalled its envoy in Ankara.

In the event that Turkey received a positive response from the Egyptian side, Davutoglu planned to have talks with Egypt’s interim President Adly Mansour and interim Prime Minister Hazem Al-Beblawi but would not meet with Egyptian army chief General Abdel Fatah el-Sisi who staged the coup.

Diplomatic sources say Egypt denied Davutoglu the opportunity to meet with Morsi as this meeting would give Morsi more legitimacy. Since the July coup, Catherine Ashton, the European Union High Representative for Foreign Affairs and Security Policy, was the only figure who was able to meet with Morsi. While Ashton was not able to see Morsi during her first visit to Cairo after the military coup, she met with the deposed leader in late July.

Meanwhile, President Abdullah Gul, Prime Minister Recep Tayyip Erdogan and Davutoglu, in separate meetings, held talks with a delegation from the African Union (AU) High-Level Panel for Egypt on Monday. Details of the meeting were not immediately clear. The AU mission aims to help Egypt overcome its political challenges.