Every morning since 1933, Turkish primary and secondary school students have had to recite the pledge of allegiance, must sing the Turkish national anthem every Friday. 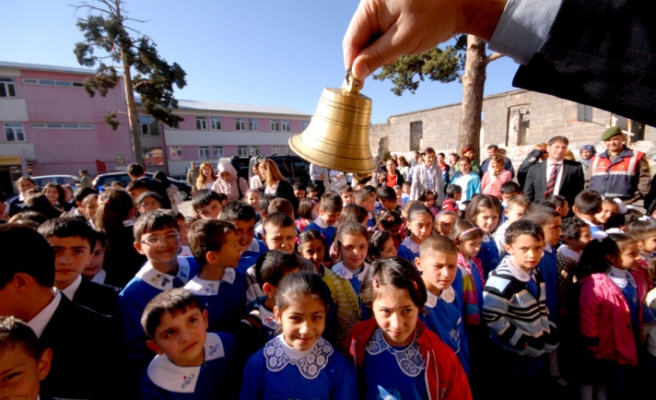 Pro-Kurdish Peace and Democracy Party (BDP) youth branches will boycott the pledge of allegiance (Andımız), which is recited by primary and secondary school students every morning, in the first week of the new term and will push for reforms to guarantee education in one’s mother tongue.

In a show of solidarity with the party, the BDP youth council said in a statement that they back a recent school boycott decision of the party in a bid to push Turkish officials to remove the Andımız, which Turkey's Kurds argue is a symbol of assimilation policies and expression of ultra-nationalist and racist ideology.

Every morning since 1933, Turkish primary and secondary school students have had to recite the pledge of allegiance (Andımız), while primary, secondary and high school students must sing the Turkish national anthem every Friday.

This practice has led to resentment among the Kurdish population as they view such activities in schools as part of broader assimilation policies and ultra-nationalist ideology that ignores existence of minority identities in Turkey.

The BDP has called on its constituency not to send their children to school in the first week of the new season,  kicks off today, as part of its boycotting campaign to step up pressure on the Turkish government to address their demands.

The BDP youth said in the statement that their ultimate goal is to secure the removal of the Andımız and see education in one’s mother tongue guaranteed.

"Our people again will go to schools in the new term repeating a fascist and racist ‘pledge of allegiance,’ a remnant of the last century, without their [demand for the] right to education in mother tongue being met," the statement said.

The BDP youth council also said they will not let the issue of “education in one’s mother tongue” become an object of debate and bargains in this century, as every people have natural rights to develop their linguistic and cultural identity.