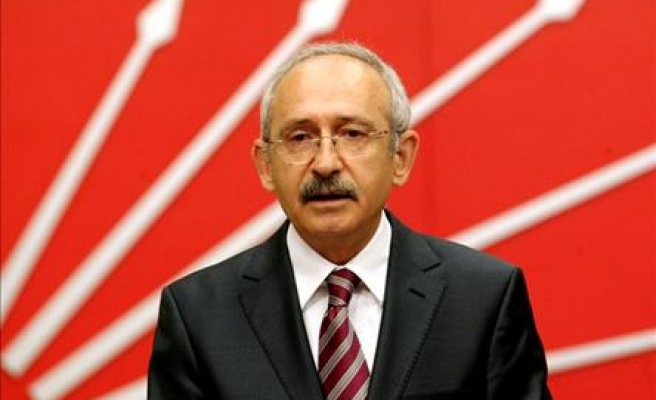 Head of Turkish Republican People's Party (CHP) Kemal Kilicdaroglu's planned meeting with Head of Group of Socialists and Democrats (S&D) in the European Parliament Hannes Swoboda did not occur on Wednesday.

Swoboda was troubled with the statements of Kilicdaroglu, who compared Turkish Prime Minister Recep Tayyip Erdogan to Syrian President Bashar al-Assad and did not want to meet him, AP Socialist Group sources stated.

In a joint meeting with Kilicdaroglu on Wednesday, Swoboda left for the meeting of Socialist Group when the questions intended to him were over. Kilicdaroglu proceeded to answer the questions and stated that Erdogan is responsible for the murderer of 51 people, killed on Saturday in Reyhanli town of Turkey.

He added that Erdogan and al-Assad were "tyrannisers" and that they differ in "tone" by saying, "what kind of a difference is there in the sense of democracy."

President of the Socialist Group in the European Parliament Hannes Swoboda stated Wednesday that Turkish Prime Minister Recep Tayyip Erdogan cannot be compared to Syria's Assad with his ongoing war and terror upon the Syrian people.

"Even though his policies are criticized legally, Erdogan is incomparable with Assad with his ongoing war and terror upon the Syrian people," Swoboda said.

Answering the questions on the blast in Reyhanli district of Turkish southern border province of Hatay on Saturday, Turkish opposition leader Kilicdaroglu defined Assad and Erdogan as both "oppressive" with a "difference in intonation."

Accompanied by a delegation of his party deputies, Turkish opposition (CHP) leader Kemal Kilicdaroglu is in Brussels on Wednesday for talks with Hannes Swoboda, the President of the Socialist Group in the European Parliament.

Not clever to compare Erdogan to Assad

Swoboda described the comparison as unacceptable. “One is a bloody dictator and I made it clear that you sometimes need to talk to bloody dictators to save human lives. So you cannot compare Erdoğan with Assad. If you do it in Turkey, it is not my business; I would say it is not very clever. But if it is done in my house, so to say, in front of the posters of my political group, it is totally unacceptable,” he added.

Explaining why he canceled the meeting, the European politician said in an interview with Turkish press that Kılıçdaroğlu was not ready to withdraw the statement because of pressure from some of his advisors.

Swoboda added that he asked Kılıçdaroğlu's Republican People's Party (CHP) to make a clarification that it was not meant as a direct comparison between the two politicians, and this was agreed with by people around him, but finally one of Kilicdaroglu’s advisors said, “No, we cannot publish that.”

“Then I said there is nothing to talk about,” Swoboda stressed.

Speaking about the main opposition party's future, Swoboda said “some things have changed” and that there is what he called an “old guard behind [Kılıçdaroğlu].”

Swoboda stated that if the Turkish opposition party wants to be part of the progressive family of a social democratic party, he has to accept its values. “Why is the CHP not on the [front] line to find a solution to the Kurdish and several other issues?” Swoboda inquired.