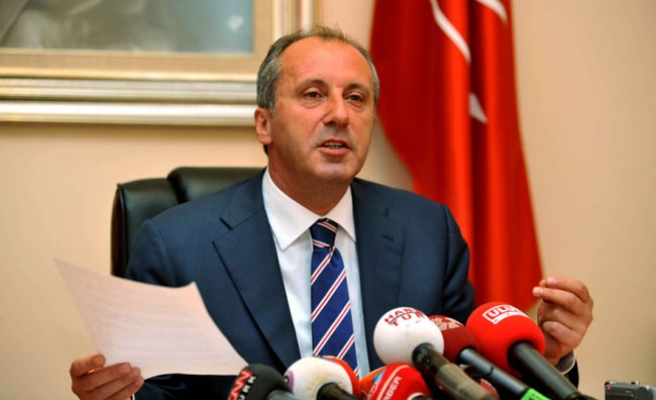 The main opposition Republican People's Party (CHP) presented a motion to Parliament on Wednesday seeking clarification of whether an illegal tape recording showing government representatives meeting with members of the outlawed PKK is actually authentic.

In a written question, CHP parliamentary group deputy chairman Muharrem İnce asked whether the government had sanctioned the secret meeting allegedly held in Oslo, Norway. The voice recording was posted online on video sharing website vimeo.com late Monday night and was later shared by pro-PKK news agencies before being withdrawn.

An almost 50-minute voice recording revealed that National Intelligence Organization (MİT) Undersecretary Hakan Fidan joined in the meeting as the "special envoy of Turkish Prime Minister Recep Tayyip Erdoğan." At the time Fidan was serving as the deputy undersecretary of the Prime Ministry and had not yet been appointed as the head of MİT.

Deputy Undersecretary Afet Güneş represented the intelligence organization at the meeting. Senior PKK leaders Mustafa Karasu, Sabit Ok and Zübeyr Aydar met with government representatives under the mediation of a representative from an unknown "coordinator country."

"Did this meeting occur upon your instruction? What is the basis of Hakan Fidan's statement in which he says, 'I am the special envoy of the prime minister'?" İnce asked in his question submitted to Parliament.

CHP leader Kemal Kılıçdaroğlu also criticized Erdoğan, saying the meeting was held at the request of the prime minister. "The language used in public is diametrically opposed to the language used behind closed doors," he said, adding that he expects an explanation from Erdoğan.

The Nationalists Movement Party (MHP) was cautious in its reaction to the illegal voice recording but did say, however, that the leak must have come from the PKK itself, apparently to blackmail the government in its fight against "terror". Mehmet Şandır, the MHP's parliamentary group deputy chairman, said, "This was a threat leveled against Turkey and was an attempt to prevent the decision of the government to fight terrorism." Şandır vowed the MHP would support the government in every decision to fight the PKK.

Recalling that the government had reacted very strongly against allegations of similar meetings with PKK leader Abdullah Öcalan during its election campaign three months ago, Şandır said, "This voice recording confirmed what our leader, Devlet Bahçeli, had said back then."

Şandır also remarked about the timing of the leak, adding, "This was made to prevent a cross-border land operation by Turkey." Turkey has conducted aerial attacks against the organization since Aug. 17, following the PKK killings of dozens of soldiers in southeastern Turkey, and many expect a land operation by the Turkish Armed Forces (TSK) is imminent.

Commenting on the voice recording, pro-Kurdish Peace and Democracy Party (BDP) officials have said that public reaction to the recording may offer an opportunity for peace. BDP Co-chairman Selahattin Demirtaş said, "The time is ripe for open negotiations between the PKK and the government."

"The Turkish public is ready for negotiations. People say holding talks is quite normal. If desired, the government can talk to Öcalan or the PKK. There is no logic behind the statement saying that 'you cannot negotiate with terrorists'," Demirtaş explained.

On the other hand, ruling Justice and Development Party (AK Party) deputy Şamil Tayyar pointed the finger at Israel as the source of the leak. Stressing that Israeli intelligence services have influence in both the PKK and MİT, Tayyar said, "Turkey's new foreign policy made Israel quite uncomfortable."

He also said the timing was important as it coincided with the visit of the Turkish prime minister to Egypt. "This is a plot against the government. Whether the PKK or MİT leaked this voice recording, I would not be surprised if Israel was somehow involved behind the scenes in this operation," Tayyar explained.

Ankara has downgraded diplomatic relations with Israel and suspended defense trade following the Jewish state's refusal to apologize for its deadly 2010 assault on a civilian ship challenging its Gaza blockade in which nine Turks were killed. Turkey expelled the Israeli ambassador and other senior diplomats and vowed to take further measures against Israel. In a rebuff to Tel Aviv, Ankara is also lobbying for the recognition of Palestine as an independent state in the upcoming general assembly meeting of the United Nations.

Many experts believe the leak was the latest attempt to influence Turkish public opinion against the government. Yasin Aktay, director of the Institute of Strategic Thinking (SDE), said the attempt will backfire. "Some say this would finish the government, but I do not agree. This is quite normal if you want to end the bloodshed," he told cihan news agency.