The fate of a redevelopment plan aimed at pedestrianizing İstanbul's Taksim Square is facing uncertainty after it was revealed on Tuesday that an administrative court has canceled the project. 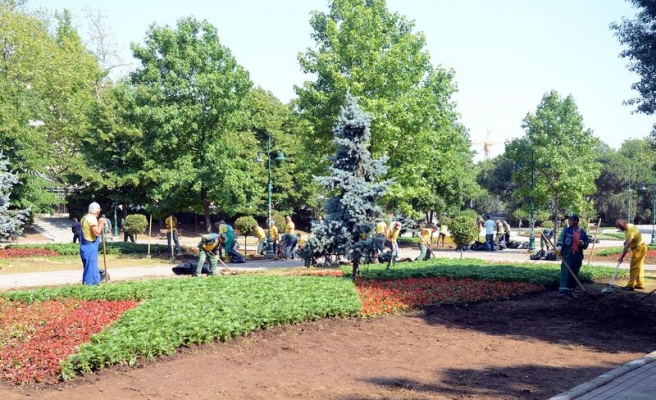 The fate of a redevelopment plan aimed at pedestrianizing İstanbul's Taksim Square is facing uncertainty after it was revealed on Tuesday that an administrative court has canceled the project, which also includes plans to demolish Gezi Park that sparked weeks of protests across Turkey.

The İstanbul 1st Administrative Court made its ruling on June 6, but it went unnoticed until Tuesday, when another court ruling mentioning it was revealed to the public. As a consequence of the verdict, excavations and tunnel works -- which have been carried out as a part of the project since November 5 by the İstanbul Metropolitan Municipality (İBB) -- will have to be reversed, says Emre Baturay Altınok, lawyer of the Chamber of Landscape Architects affiliated with the Turkish Union of Engineers and Architects' Chambers (TMMOB), one of the plaintiffs in the mentioned case.

The decision that revealed the earlier verdict belongs to the İstanbul 6th Administrative Court, which, in its own verdict, rejected a request by the Culture and Tourism Ministry to lift the court's injunction on the construction of a replica of the Ottoman-era Topçu Barracks over Gezi Park. The June 6 verdict cancels the entire rejuvenation project in Taksim, including the construction plans of Topçu Barracks over Gezi Park. Turkish newspapers' revelation of the verdict dated June 6 sparked a debate as to how the verdict has remained a secret so far.

Three plaintiffs of the case at the İstanbul 1st Administrative Court were TMMOB Chamber of Landscape Architects, TMMOB Chamber of Architects and TMMOB Chamber of City Planners. They brought the suit against the Ministry of Culture and Tourism with the claim that the project is against public interest and in contradiction of the legislation on construction and protection of cultural and natural properties. The plaintiffs also argued that the project was in violation of accepted urban development and planning methods. The chambers have come under fire for not reporting they had won the case on June 6 and letting the unrest continue across Turkey.

The three chambers under TMMOB defended themselves by stating that the verdict hasn't been issued to them yet and they found out about it via the media on Wednesday. Emre Baturay Altınok, lawyer of Chamber of Landscape Architects, said that TMMOB had only presumed the court would cancel the Taksim rejuvenation project because of the expert report supporting their claim, but they didn't know about the decision. Altınok said he and two of his colleagues -- Koray Cengiz, lawyer of TMMOB Chamber of City Planners and Can Atalay, lawyer of TMMOB Chamber of Architects -- made great effort to speed up the verdict by sending numerous online petitions to the court, especially during the days of violent crackdowns on protests against Gezi Park demolition plans. Altınok told Today's Zaman that the verdict on June 6 is a result of their efforts to speed up the process.

The Taksim project, which turned out to have been canceled on June 6, was the decision of a majority vote. In the suit brought by the TMMOB, it is stated that Taksim Square's historical value, cultural inheritance, social, cultural, economic and physical conditions weren't considered for the project. It is also emphasized that the plan allowed Gezi Park, the only green field in the Taksim area, to be open for construction and tunnels for vehicles would block pedestrian traffic.

The rule indicates that the project violates construction legislation regarding the protection of cultural and natural properties, urban development, planning methods and is against public interest. Approval was not sought from the Protection of Natural Properties Commission according to the Code of Protection of Cultural and Natural Properties, and there was also no approval from the İstanbul Metropolitan Municipality. The court also states that nongovernmental organizations, universities and residents in the protection area should have been asked their views during the drafting of the project.

Gezi Park was planned to be demolished in a bid to rebuild an Ottoman-era military building that was built in 1780 and torn down in 1940 as part of the government's rejuvenation project in Taksim.