Crisis 'over' as Turkish PM reaches deal with army on posts 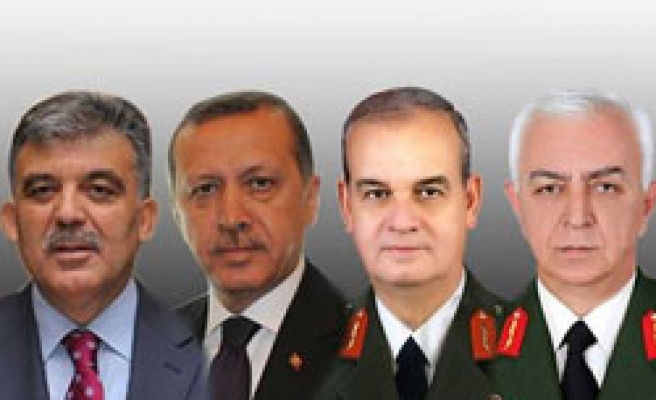 Turkish Prime Minister Tayyip Erdogan said on Sunday authorities had "largely" reached agreement on the appointment of new military commanders, defusing a row between the government and top army brass.

Turkey announced promotions for senior brass last week, but left the top posts of head of the armed forces and commander of ground forces unfilled amid coup investigations into senior officers.

The council had been expected to appoint General Isik Kosaner, the current ground forces chief, as chief of staff for NATO's second largest armed forces.

Hasan Igsiz, commander of the prestigious First Army, had been tipped to succeed Kosaner as head of the Turkish land forces.

But the government opposed Igsiz who a state prosecutor summoned with 18 other officers to give statements on "Internet Memorandum", internet websites created in order to wear out the government.

Gen. Hasan Igsiz will give testimony as "suspect" in Ergenekon case.

Erdogan told reporters after a rally in the central Turkish town of Afyonkarahisar that a decree on the appointments would be submitted to President Abdullah Gul for his approval later on Sunday.

"I think that we will make our proposal to our president this evening. Right now our preparations are almost completed. We are close to largely reaching an agreement," Erdogan told reporters in comments broadcast.

Chief of the General Staff Gen. Ilker Basbug would retire as planned in August 30.