Crisis remains unresolved over appointments of new chief of staff and commander of the Land Forces after Turkey's PM met top army chief in a summit requested by military. 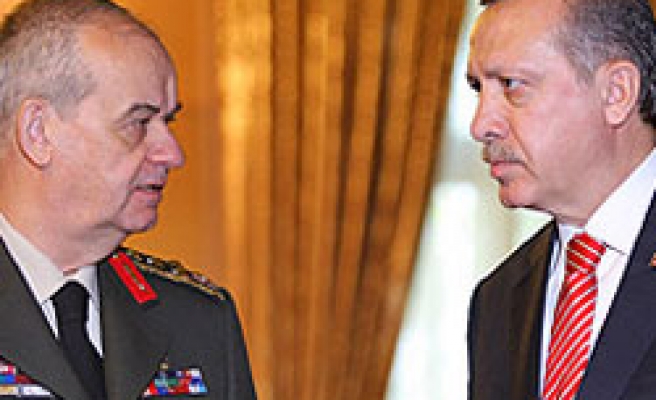 Crisis remains unresolved over appointments of new chief of staff and commander of the Land Forces after Turkey's PM met top army chief in a summit requested by military.

Turkey announced promotions for senior brass on Wednesday, but left the top posts of head of the armed forces and commander of ground forces unfilled amid coup investigations into senior officers.

Turkish Prime Minister Recep Tayyip Erdogan and Chief of the General Staff Gen. Ilker Basbug met late on Friday, reportedly discussing those appointments, however, no statement was made following the meeting that came after the Supreme Military Council, or YAS, which ended Wednesday.

The meeting lasted one hour.

The council had been expected to appoint General Isik Kosaner, the current ground forces chief, as chief of staff for NATO's second largest armed forces.

Hasan Igsiz, commander of the prestigious First Army, had been tipped to succeed Kosaner as head of the Turkish land forces. But while the council was in session, a state prosecutor summoned Igsiz and 18 other officers to give statements on "Internet Memorandum", internet websites created in order to wear out the government.

Gen. Hasan Igsiz will give testimony as "suspect" in Ergenekon case on claims over the document which was allegedly signed also by Igsiz.

But, for the first time, Erdogan had not sent the military's proposal to promote Gen. Hasan Igsiz as the Land Forces commander, to the presidential palace for approval. Therefore, the appointment of the new Chief of Staff was also not made.

Meanwhile, one hour before the meeting, a Turkish appeals court lifted arrest warrants for 102 suspects in Sledgehammer coup case.

Before the meeting, Erdogan said, that there was time till the end of the month to make the appointments.

Media suggested, the government wanted the two appointments to be made together, but "army's insistence on Igsiz" led the problems in appointing the chief of staff as well.

Basbug would retire as planned in August 30.