Police fired tear gas to break up clashes between Turkish and Kurdish protesters after a deadly attack on police in the area fuelled ethnic tensions. 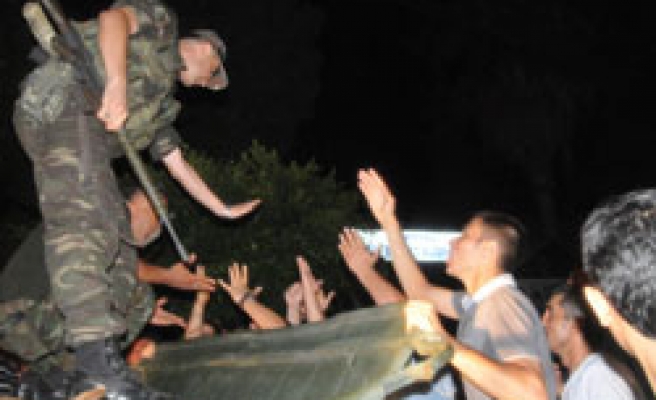 Police fired tear gas to break up clashes between Turkish and Kurdish protesters in southern Turkey on Tuesday after a deadly attack on police in the area fuelled ethnic tensions.

The fighting followed similar ethnic clashes in northwest Turkey a day earlier. The interior minister blamed provocateurs for the violence as Turkey prepares for a September referendum on constitutional reform and a parliamentary election next year.

On Monday evening gunmen in a van shot four Turkish police officers, opening fire on their vehicle in the town of Dortyol in the southern province of Hatay.

While the identity of the gunmen was unclear, local suspicions appeared to be directed at PKK militants -- the shooting triggered fighting between Turks and Kurds.

But the group has not yet claimed responsibility.

State-run Anatolian news agency said some of the protesters chanted slogans in Kurdish in support of the jailed PKK leader.

In the wake of the attack on the police, Interior Minster Besir Atalay pledged to wipe out the presence of PKK militants in the Amanos mountains of Hatay, near the border with Syria.

"The governors, regional commanders and police are here... I say clear the Amanos (mountains). Do what you have to do," Atalay said at a ceremony for the dead police officers in the southern city of Adana on Tuesday. Six soldiers were killed in a PKK rocket attack in the Iskenderun area of Hatay at the end of May.

The clashes in Hatay came a day after Turks and Kurds rioted at Inegol in the northwestern province of Bursa after a quarrel in a coffee house. Five people were stabbed in that fight.

Hundreds of people subsequently threw stones at the local municipality building, demanding that police hand over the attackers. They set fire to cars and set up barricades in clashes which continued through the night.

"Civil war rehearsal," a headline in Taraf newspaper said of the clashes in Inegol.

Anatolian agency said 51 people have been detained in connection with those clashes.

"Some people want to feed animosity between our brothers. Don't allow this. This means serving terrorism," Atalay said.

There has been an upsurge in PKK attacks since militants ended a 14-month ceasefire at the end of May.

The PKK took up arms against the state in 1984 and more than 40,000 people have been killed in the conflict.