Erdogan: For me there's no difference if Sunni or Shia-UPDATE

Iranian President Rouhani has thanked Turkey for their support during nuclear negotiations. Erdogan has said that irrespective of sectarian differences that people are being killed. The two will sign an 8 point agreement after their meeting. 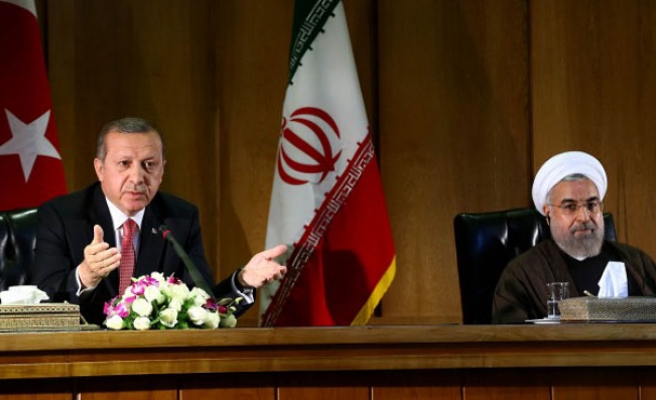 Turkish President Recep Tayyip Erdogan paid a one-day visit to Iran at a time when relations between Ankara and Tehran -- already strained by disagreements over Syria -- have been battered by events in Yemen, where they have backed opposing combatants.

In a live broadcast, Erdogan said that  Turkey and Iran "should play the mediation role" in the conflicts in Iraq and Syria. Despite agreeing on a number of issues both steered clear of directly addressing differences over conflict-ridden Yemen.

He said: "Who died there? Humans. Muslims.

"I don't make any discrimination, I don't say, 'Shia people died, Sunni people died'. For me, there are only human beings - Muslims - dying there."

Erdogan said Iran and Turkey should mediate between the battling sides and hope to get a result.

"We both believed that it is necessary for us to witness the end of war and bloodletting in Yemen as soon as possible," Rouhani said.

During the press conference, Erdogan said "history and culture has been slaughtered in Iraq."

Iranian President Rouhani thanked Turkey for their support during nuclear negotiations. Erdogan has said that irrespective of sectarian differences that people were being killed.

Rouhani has said that, "We have held our second join high-level cooperation council. We  have discussed our bilateral cooperation on regional issues. There are many things we need to deal with in our bilateral relations, deals including energy, transportation, and investing in mutual investments. We have made agreements on having more secure borders to deal with terrorist threats.  We are discussing these issues at a very sensitive time".

"There is much insecurity and instability around us and both sides have unanimously have agreed that it can no longer be tolerated. We have demonstrated our decisiveness against extremism and terrorism. Thanking Turkey for their support between the  P5+1 countries and Iran, Rouhani said that, "In regards to the nuclear issue, I wish to thank the Presidents support for Iran.

The discussions at Lausanne will facilitate ease of negotiations for economic relations between Iran and Turkey. This is a sensitive time for discussions and regional issues.  We have reiterated to each other that we can longer tolerate the insecurity issues. We have demonstrated our fight against radicalism".

Turkish President Tayyip Erdogan said, Iran and Turkey should start trading in their own currencies instead of dollars or euros to avoid foreign exchange volatility.

"We shouldn't be under the pressure of other currencies," Erdogan said. "We should do our purchases with Iranian money and Iranians with Turkish"

"We want to change things around quickly. At this point in time, we are purchasing the most expensive natural gas from Iran. If the price is reduced we can purchase more gas from Iran. We need to overcome the tourism and transportation issues between the two countries".

Iran is the most expensive gas exporter to Turkey, while Russia has recently agreed to lower its price to Turkey by 10.25 percent.

"We need to overcome the stalling in that regard."

Turkey, which imports 10 billion cubic meters of Iranian gas a year, took Iran to the International Chamber of Commerce in Switzerland in 2012 after Tehran rejected a complaint that the price was too high. Turkey needs Iranian gas and sanctions-hit Tehran desperately needs export markets.

Trade between Ankara and Tehran has also been hampered by a dispute over the price of natural gas.

But analysts have said that the friction between the neighbours will be kept in check by economic dependency.

Erdogan has accused Iran of trying to dominate the region. Some Iranian lawmakers had called for Tehran to cancel his visit, with one politician saying the Turkish president wanted to rebuild the Ottoman Empire.