Erdogan pledges a 'new Turkey' as he takes presidency

"Today, Turkey has been born from the ashes, the building and fixing process for a new Turkey has gained strength," ﻿newly elected Turkish president Recep Tayyip Erdogan wrote. 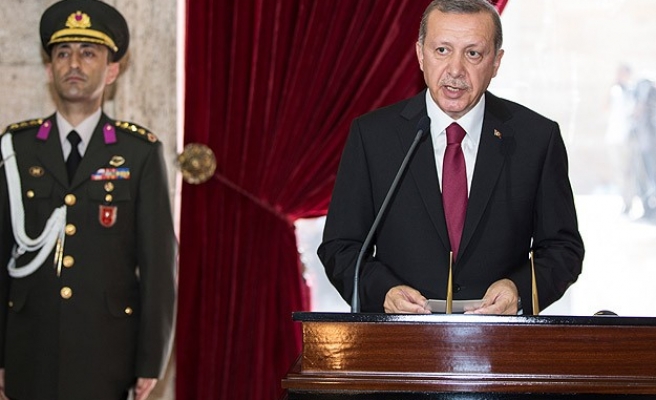 Newly elected Turkish president Recep Tayyip Erdogan has stuck with the tradition of the Turkish republic during in inauguration in Ankara today by visiting the tomb of the secular state's founder Mustafa Kemal Ataturk.

Conforming with the republic's custom, Erdogan addressed the late Ataturk in a written message in a special notebook kept at the tomb. In his message, Erdogan referred to himself as Turkey's 12th president and the first president to be elected by popular vote.

Erdogan credited Ataturk for his victories during Turkey's war of independence, and described a change he managed to pass in the constitution during his reign as prime minister allowing the president to be elected by the people as another victory of the struggle Ataturk had started.

"Today, Turkey has been born from the ashes, the building and fixing process for a new Turkey has gained strength," Erdogan wrote, adding that the country has finally made peace with its ancient civilization and returned to its roots.

Having dominated Turkish politics for over a decade, Erdogan has served as Turkey's Prime Minister since 2003 and led the ruling Justice and Development Party (AK Party) to victory in three successive general elections.

In elections held August 10, Erdogan was voted in to become the 12th Turkish president, taking 52% of the votes in the first round ahead of rivals Ekmeleddin Ihsanoglu and Selahattin Demirtas.

Erdogan replaces outgoing president and the co-founder of the AK Party Abdullah Gul, who has indicated that he may return to his party after stepping down.