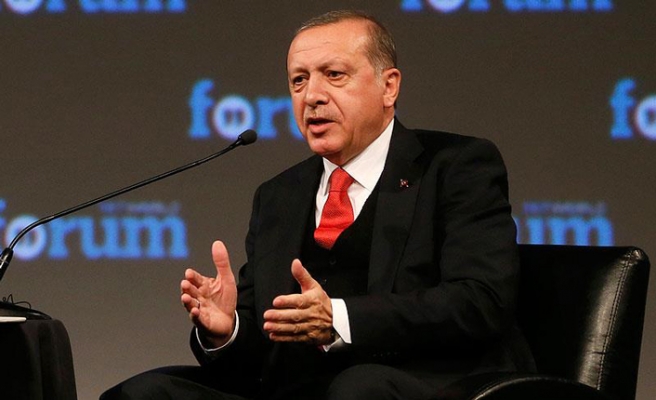 Turkey's president on Thursday called for serious reform of the United Nations Security Council, which he said should have representation from countries on all the world's continents.

Speaking at the closing session of the TRT World Forum in Istanbul, which Anadolu Agency is global communication partner for, Recep Tayyip Erdogan said: “We need to achieve a United Nations Security Council with participation from seven continents.”

The Turkish president has long advocated reforming the structure of the Security Council, using the motto: "The world is bigger than five."

“The era of five permanent members [on the UNSC] is over," he said, arguing that the present arrangement comes from "the circumstances of World War II."

But, he said: "We are not living under the same circumstances. It is time to make a new transition and a new change [at the UN].”

The UN has yet to respond to the quest for justice, the Turkish president said, citing as an example UN inaction on the Palestinian issue.

"Is the Palestinian issue resolvable?" he asked rhetorically.

"Why not? Because there are many decisions taken against Israel at the UN, but none of them is implementable."

Erdogan decried the "cruelty" of the EU failing to offer Turkey membership since 1963, adding that a referendum may be held in Turkey on its decades-long EU bid.

“There are many things that we can contribute to the European Union," said Erdogan.

"They may have many things to contribute to us but what should be done is, I suppose, to consult with 81 million [people in Turkey] and look at what they will decide.”

After Turkey’s accession talks began in 2005, they stalled in 2007 due to objections from the Greek Cypriot administration on the divided island of Cyprus, as well as opposition from Germany and France.

In recent years, referendums have given Turkish voters a say on such weighty issues as direct election of the president and changing Turkey’s government system.

To gain EU membership, Turkey must successfully conclude negotiations on 35 policy chapters that involve reforms and the adoption of European standards. As of May 2016, a total of 16 chapters had been opened and one concluded.

However, in December 2016, the member states said no new chapters would be opened.

Asked whether the EU project is nearing its end, Erdogan said: “I also see those signs.”

In his speech, the president also accused the U.S. of sending 19,000 truckloads of weapons and ammunition to terrorist groups in Syria.

Turkey has repeatedly objected to U.S. support for the terrorist PKK/PYD as a "reliable ally" in Syria, which has included supplying arms and equipment.

On Turkish troops’ presence in Syria, Erdogan said: “The people of Syrian invited us there. ‘Come here to save us,’ they said.”

He said this was the case in the Syrian cities of Idlib and Afrin. Turkey will continue to support the oppressed people in Syria, he added.

Erdogan said that Turkey will leave Syria only when the Syrian people have held an election in peace.

On Jan. 20, Turkey launched Operation Olive Branch to remove YPG/PKK and Daesh terrorists from Afrin, near the Turkish border. On March 18, Turkish troops and the Free Syrian Army liberated the Afrin district center.