As Balanlı was speaking, there were applause and whistles in the courtroom from the observers, which drew a warning from Judge Diken. 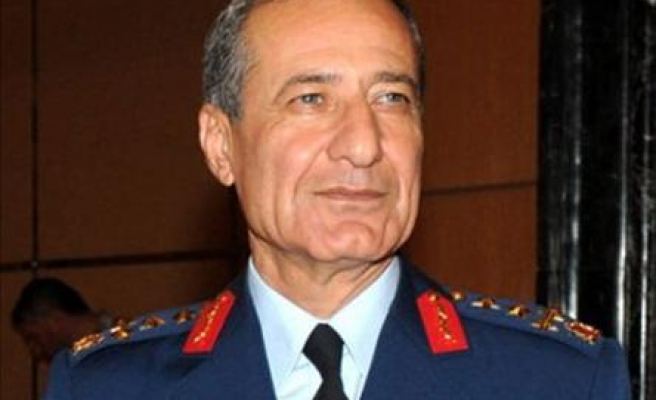 War academy commander Gen. Bilgin Balanlı, who was arrested in May, appeared in court on Monday in the first hearing of the second Sledgehammer trial and became the first active duty general to appear before a judge in a coup case.

Sledgehammer refers to a suspected coup plot believed to have been devised in 2003 with the aim of unseating the Justice and Development Party (AK Party) government through violent means. According to the Sledgehammer plan, the military would systematically foment chaos in society through a series of violent acts, among which were planned bombings of the Fatih and Beyazıt mosques in İstanbul.

The investigation, which resulted in Balanlı's arrest, was launched over documents found in the Eskişehir home of Col. Hakan Büyük earlier this year.

The trial of Gen. Balanlı and 27 other suspects, 21 of whom are jailed, began at the İstanbul 10th High Criminal Court at the Silivri prison complex in İstanbul on Monday. The suspects are charged with attempting to destroy Parliament and overthrow the government. If convicted, the charges carry a prison sentence of up to 20 years. The prosecutor overseeing the investigation asked the court to merge this case with the first Sledgehammer trial. The İstanbul 10th High Criminal Court was expected to hand down a decision in this regard during the first hearing.

When the presiding judge, Ömer Diken, asked for the reading of the indictment, lawyers for the suspects said they would submit a request for a change of judges, claiming that the court had lost its impartiality for "jailing the suspects in an illegitimate way." Apparently to bide time, the judge told the lawyers that they could make their request following the reading out of the indictment, but the lawyers insisted and made their request.

In his defense, Balanlı denied all charges against him and claimed that many members of the Turkish Armed Forces (TSK), including himself, have been jailed over ungrounded allegations.

"The arrests [of TSK members] run contrary to law, justness, justice and conscientious values," he said. Balanlı claimed that the Sledgehammer investigation and trial were planned and form part of a conspiracy. He added: "There is obviously a game being played over the TSK and its heroic personnel. It is the job of the public prosecutors to expose those who slander the dignified personnel of the TSK."

Both active and retired military members have been prosecuted or jailed as part of the probes into shady military plans which aimed to cause chaos in the country and had an ultimate goal of a military takeover. Currently, there are nearly 200 retired and serving members of the TSK who are under arrest on charges of involvement in the Sledgehammer plan.

"Unfortunately, the elimination operation that was carried out as a result of an ongoing slander campaign against the TSK seems to have succeeded. If it succeeds in a real sense, the TSK, the Turkish Republic and the Turkish nation will have lost," Balanlı said.

As Balanlı was speaking, there were applause and whistles in the courtroom from the observers, which drew a warning from Judge Diken. He asked those whistling to leave the courtroom, saying that they would be identified from security footage. Only one person left.

Balanlı objected to the judge for intervening in his speech. "I am the one who presides over the sessions; I can interfere. Please, speak without raising your voice," the judge replied. Balanlı said he was speaking in a loud voice so that everyone would hear him.

Further to his defense, the general also said some groups that are disturbed as to the level of success attained by the air forces, which is celebrating 100 years since its establishment, have a role in the "conspiracy."

According to the documents seized at Büyük's house, while serving as the 1st Air Forces commander, Gen. Balanlı monitored civilian activities at a farm in Eskişehir on the basis that people working there were engaged in reactionary activities. Air Forces Command allegedly operated RF-4 aircraft to monitor these activities at the Bilvanis farm, and the aircraft reported the daily routine at the farm to command. The Air Forces Command argued that civilians staying on the farm were engaged in illegal activities.

Also suggested was that Büyük kept tabs on some military officers in accordance with their religious and ideological tendencies, according to other documents found in his house.

This alleged spying occurred prior to the Feb. 28, 1997 postmodern coup. Büyük maintained records on military officers at Air Forces Command. As a result, many military officers were dismissed from the TSK after the 1997 coup on the grounds that they were engaged in acts of reactionaryism. The retired colonel's documents showed that some officers were accused of acts of reactionaryism because they kept a Quran in their houses or offices.

A total of six individuals, including Büyük, have been arrested in connection with the documents seized in Eskişehir.