The match-fixing probe has landed the TFF in a difficult position as it struggles to decide whether or not to punish the clubs involved amid an ongoing investigation. 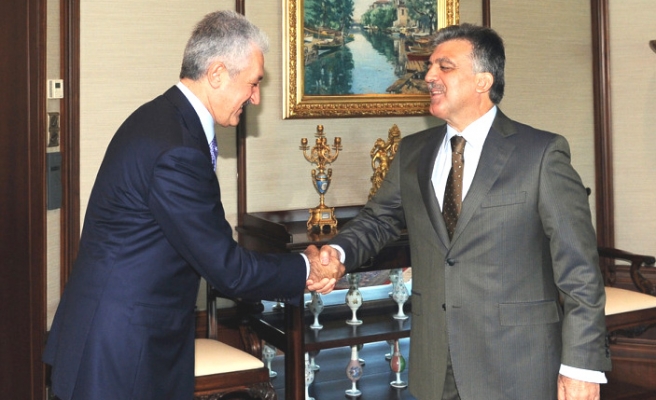 President Abdullah Gül had talks with Turkish Football Federation (TFF) head Mehmet Ali Aydınlar on Wednesday on an ongoing match-fixing probe that has shaken the world of Turkish football since it first got under way in early July.

Speaking to the press after the 50-minute meeting at the presidential mansion in Tarabya, İstanbul, Aydınlar said he and other representatives from the TFF "informed the president about the match-fixing probe." When asked if Gül was interested in details of the ongoing probe, the TFF president said Gül was closely following the events in Turkish football.

"We had an exchange of views on that," he told reporters. "We seek support from everyone in this process. We asked for Mr. President's support as well."

The match-fixing probe has landed the TFF in a difficult position as it struggles to decide whether or not to punish the clubs involved amid an ongoing investigation. It said earlier this month that it delayed a decision on possible sanctions for the clubs involved in the probe, as it will wait for the prosecutor in charge of the investigation to present his indictment.

More than 30 people, including Super League champion Fenerbahçe's President Aziz Yıldırım, have been sent to jail pending trial in the probe that involved 19 games last season and has implicated Fenerbahçe and several other clubs.

Yıldırım has complained about the way the prosecutor handled the case in letters to President Gül and Prime Minister Recep Tayyip Erdoğan, claiming that the prosecutor is preparing to indict him on the basis of armed criminal organization charges, not on the basis of a recently enacted law on match-fixing and violence in sports. He also complained of leaks to the media about questions posed to him and alleged evidence against him in violation of the principle of the secrecy of a legal investigation, while other people who also testified in the case were not subject to the same exposure.

Fenerbahçe player: They don't deserve this

In the meantime, Emre Belözoğlu, a Fenerbahçe player who has also testified as part of the investigation, said on Wednesday that those involved in the case were being treated unjustly, particularly by the media.

"They did not rape 40 women; they did not point guns at our troops. They don't deserve this treatment," he was quoted as saying to reporters by ntvmsnbc.com news portal. "This investigation has been watered down. I am talking about the humanitarian aspect, I naturally cannot comment on the legal aspect. A decision will be made, and we will all respect it," he added.

Belözoğlu said he himself brought 18 different charges against one newspaper alone because of its coverage of the match-fixing probe. "There was a photo of me, my wife and a friend of mine published in a newspaper. The caption below said we looked like 'Reservoir Dogs.' Is this fair?" he asked.