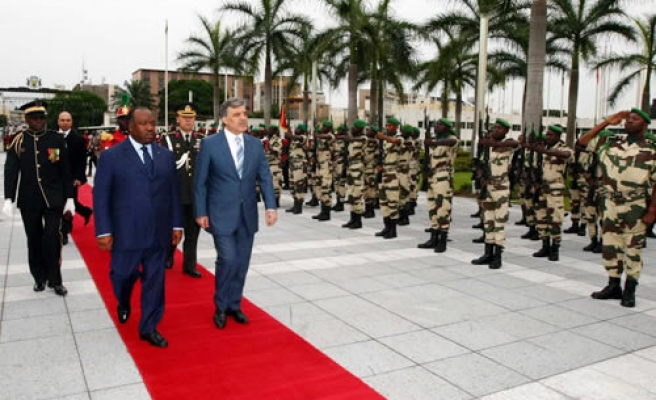 President Abdullah Gül has fulfilled a promise to Gabonese fisherman Nyovvor Ayao, made during his visit to Gabon in March 2011, to give him a fishing boat engine as a gift.

According to a news story published in the Hürriyet daily on Friday, the boat engine promised by President Gül during his official visit to Libreville will be presented in a ceremony on July 14.

President Gül met Ayao during his visit to Gabon while taking a stroll on the beach not far from the Gabonese president's beachfront housing complex, where he was staying as a guest of honor, and promised him the fishing boat engine.

In April 2012, Ayao asked a Turkish reporter visiting Gabon for a meeting of the Organization of Islamic Cooperation (OIC) to remind the Turkish president of his unfulfilled promise, saying he had not yet received the engine.

Following publication of the news report in the Turkish media, Gabonese fisherman Ayao continued to await delivery of the fishing boat engine promised by the Turkish president. The Office of the Presidency has since taken action to fulfill Gül's promise.

Upon orders from President Gül, the Turkish Embassy in Libreville made contact with Ayao to determine the model engine required. The cost of the engine has been covered by the Turkish Cooperation and Development Agency (TİKA). Turkish Ambassador to Gabon Ahmet Demiral will present the engine to Ayao in a ceremony to be held at an international Turkish school in Libreville.

Gül's visit to Gabon on March 24-26, 2011, was the first official visit between the two countries at the presidential level. During his visit, Gül was accompanied by a large delegation of over 100 businesspeople and senior officials, including Youth and Sports Minister Faruk Nafiz Özak, Defense Minister Vecdi Gönül and Transportation Minister Mehmet Habib Soluk, as well as journalists and scientists.

Gül met with his Gabonese counterpart, Ali Bongo Ondimba, and the two presidents expressed their desire to develop bilateral ties.

During Gül's visit to Gabon, the two nations signed five agreements relating to a framework for intergovernmental military cooperation, a cooperation agreement between the governments of Turkey and Gabon, a visa exemption on diplomatic passports, a memorandum of understanding on the establishment of a political consultation mechanism between the foreign ministries of Turkey and Gabon and a declaration of goodwill between the defense ministries of the two countries.

As part of his visit, Gül also attended business forum meetings held by the Turkish Confederation of Businessmen and Industrialists (TUSKON) and visited an international Turkish school in Libreville.