"I call upon the distinguished business people here to redouble their efforts to take our relationship further and reap the benefits of enhanced cooperation," Turkish President said 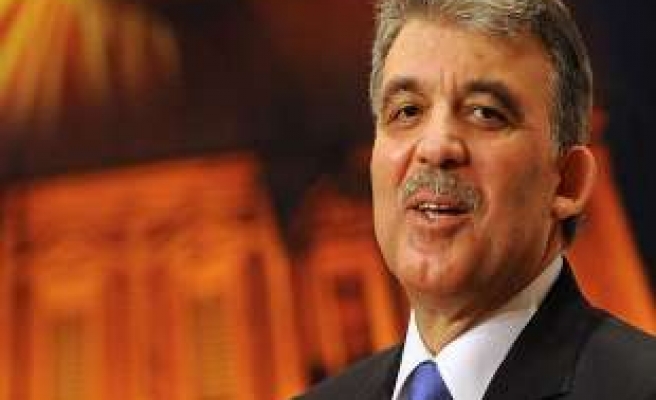 Turkish President Abdullah Gul called on the business people to increase their efforts of strengthening relationship between Turkey and the United States.

Turkish President Gul attended Monday the business dinner hosted by the American-Turkish Council and came together with businessmen in New York.

"I call upon the distinguished business people here to redouble their efforts to take our relationship further and reap the benefits of enhanced cooperation," he said.

Gul underlined the enthusiasm and dedication of American-Turkish Council members to forge closer ties between Turkey and United States.

Brefly touching on the Turkish-American relations, he said, "We are close allies and partners. We remained vital to each other’s security for many decades. We stood together in the face of many challenges during the Cold War. Today, this relationship is based on shared values and an agenda for positive change at the regional and global levels. It is what President Obama called a “model partnership” in his first ever overseas bilateral visit to Turkey."

Stating that the trade volume between the US and Turkey in 2012 surpassed 20 billion dollars, Gul said it marked a 30 percent increase compared to two years ago.

Regarding the investments, Gul said American companies invested 8.4 billion dollars in Turkey over the last decade. "The US now stands the third-largest investor in Turkey after the Netherlands and Austria. Here too, there is room for more," he said.

"Promoting investments in both countries is a must. We aim to increase awareness among Turkish and American business people through intensive dialogue."

Turkish President Gul stressed that Turkey was a fast-developing economy and a booming industrial outlet adding it ranked 17th in economic size globally and 6th in Europe.

He pointed to the Transatlantic Trade and Investment Partnership Agreement between the EU and the US and said, "Once concluded, this will create the largest free trade zone in the world."

Gul said, "Today, Turkey is one of the world’s emerging centres of attraction and a regional powerhouse aiming to serve as a force for good in its part of the world. It is a stable economic and commercial outlet with access to Europe, the Caucasus, Central Asia, the Middle East and North Africa".

"Currently, Turkey is one of the most dynamic, vibrant and resilient economies in the world. It is expected to be the fastest growing OECD member between 2011 and 2017, with an average annual growth rate of 6.7%."

"All of that is thanks to the structural reforms we instigated after the last economic crisis in 2001."

He emphasized that Turkey was a country where risk premium was low and business potential huge.

Touching on manufacturing in Turkey, Gul said Turkey was the 16th largest automotive producer in the world and the largest producer of commercial vehicles in Europe and added exports in the field reached 19 billion US dollars in 2012.

"These statistics are not exhaustive but offer just a hint," he said, "They indicate the entrepreneurial capacity of the Turkish business community and the environment of good governance that has been achieved over the last decade."

Gul invited the business people to consider Turkey for business, trade, investment, or other transactions.