Participants at the congress chanted slogans in favor of Ocalan, who is serving a life sentence in an island in the Sea of Marmara. 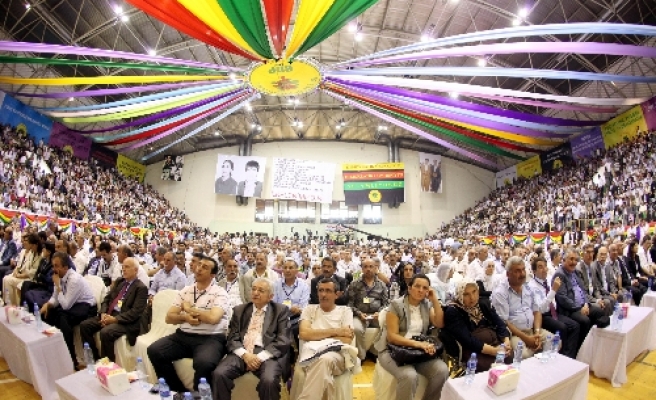 The investigation will be carried on within the scope of "making propaganda of terrorist organization" or PKK.

The office will investigate the slogans as well as the banners of Abdullah Ocalan (head of PKK militant organization) which were unfurled during the BDP's congress meeting on September 4.

BDP held its second regular congress meeting in Ankara on September 4, and Selahattin Demirtas was re-elected the chairman of the party with 627 of 629 votes, while Gultan Kisanak was elected the co-chair of the party.

The main agenda item of the congress was a demand for autonomy for Kurds. Placards in Turkish and Kurdish were hung all around the hall bearing messages for autonomy. "We greet democratic autonomy, democratic republic," "Democratic autonomy is our status, it cannot be rejected," and, "End to military operations," read some of the placards.

Participants at the congress chanted slogans in favor of Ocalan, who is serving a life sentence in an island in the Sea of Marmara.

The BDP has so far refused to take the parliamentary oath and join in parliamentary proceedings as a sign of protest of the imprisonment of six of its deputies. Thirty-six independent deputies supported by the pro-Kurdish BDP were elected in the June 12 elections; however, six of the BDP-backed deputies are currently under arrest as part of the Kurdish Communities Union (KCK) trial. The BDP made the decision to boycott Parliament after the Supreme Election Board (YSK) stripped Hatip Dicle, one of the six jailed BDP deputies, of his mandate over a prior terrorism-related conviction after the June 12 vote.