Kılıçdaroğlu to apply to ECtHR for claims of damages

Kılıçdaroğlu touched on various topics including Erdoğan's criticisms about the CHP, last week's attack on the police headquarters in Ankara, the democratization package, constitutional amendments and freedom of universities. 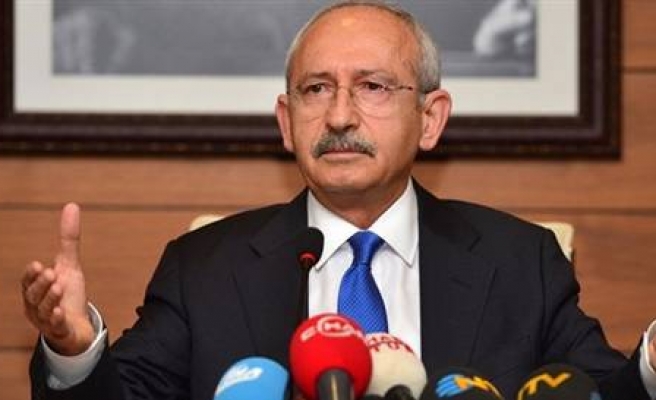 Republican People's Party (CHP) leader Kemal Kılıçdaroğlu said he would apply to the European Court of Human Rights (ECtHR) for claims of damages.

“I had no case for claims of damages before the ruling Justice and Development Party [AKP] included politics in the justice system,” said the CHP leader. Kılıçdaroğlu also criticized judges for ignoring Prime Minister Recep Tayyip Erdoğan's similar statements.

Speaking at a meeting with economy correspondents on Tuesday, Kılıçdaroğlu touched on various topics including Erdoğan's criticisms about the CHP, last week's attack on the police headquarters in Ankara, the democratization package, constitutional amendments and freedom of universities.

In response to Erdoğan's statement saying that the CHP is hand to hand with terrorist organizations, Kılıçdaroğlu accused Erdoğan of maintaining close relationships with terrorist organizations, comparing the prime minister to Catholic religious leader Monk Pierre L'Hermit, who provoked people against Turks and the Islam world during the Crusades.

Regarding the attack on Friday evening that targeted buildings belonging to the Security General Directorate in Ankara, the CHP leader recalled the government's statement that they had been following the attackers and asked why they had failed to apprehend them before the attack. “This is an obvious case of conspiracy,” Kılıçdaroğlu stated.

Underlining that he has no information on the details of the democratization package, the CHP leader expressed his party's support for the package if it really would bring about democracy. Kılıçdaroğlu also noted that in order to bring about democracy, the government should change the Sept. 12 coup constitution first. In the meeting, the CHP leader mentioned the freedom of universities, saying it would be wrong to use the police to maintain discipline in universities.