Necdet Özel was welcomed by CHP spokesman Haluk Koç at the party's headquarters, and Koç accompanied the military chief to Kılıçdaroğlu's office. 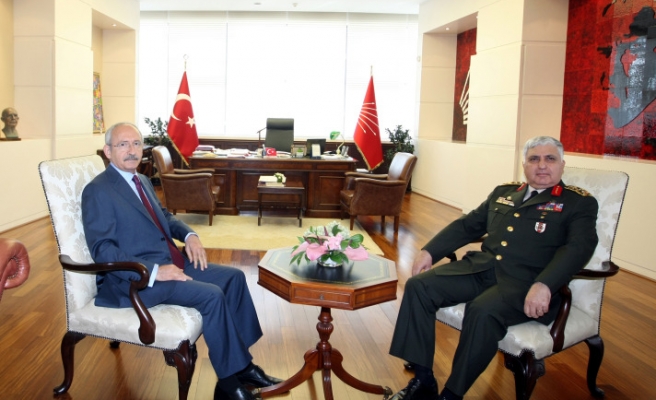 Chief of General Staff Gen. Necdet Özel paid a visit to the chairman of the main opposition Republican People's Party (CHP) Kemal Kılıçdaroğlu at the CHP headquarters in Ankara on Thursday.

In an earlier statement, Kılıçdaroğlu said he had paid a visit to the chief of General Staff in the past, and that Özel would be paying him a courtesy visit on Thursday.

Özel was welcomed by CHP spokesman Haluk Koç at the party's headquarters, and Koç accompanied the military chief to Kılıçdaroğlu's office. News sources said the CHP chairman and the chief of General Staff discussed escalating acts of PKK in Turkey. Neither Kılıçdaroğlu nor Özel made a statement after the meeting, which lasted around one-and-a-half hours.

The militant Kurdistan Workers' Party (PKK) has been targeting security forces in the eastern and western parts of Turkey. On Thursday, one soldier was killed in an explosion when PKK militants attacked a military vehicle in the western province of İzmir. Earlier this week, six soldiers and two village guards were killed by militants of the same group who attacked four military outposts in the southeastern province of Hakkari.

Özel's visit came amidst claims of tension between him and the CHP leader.

There have been reports in the Turkish media that the CHP leader is at odds with the military chief, and as a result did not shake hands with Özel at the funeral of a Turkish soldier killed by PKK earlier this week.