Outgoing Chief of General Staff Gen. Ilker Basbug, who will retire at the end of this month, paid a farewell visit to Prime Minister Recep Tayyip Erdogan on Monday. 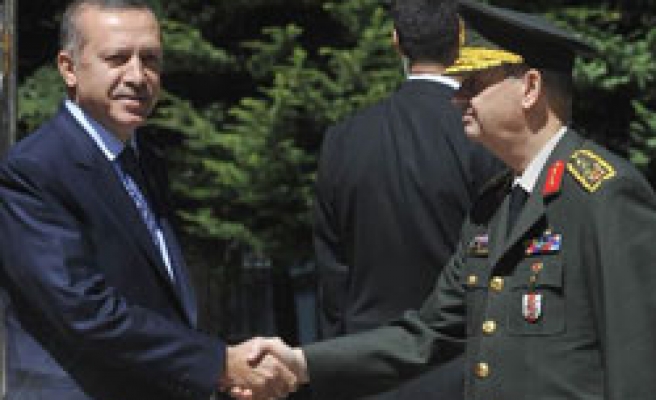 Outgoing Chief of General Staff Gen. Ilker Basbug, who will retire at the end of this month, paid a farewell visit to Prime Minister Recep Tayyip Erdogan on Monday.

Erdogan received Gen. Basbug at the Prime Ministry. After the meeting, which lasted one hour and 45 minutes, the prime minister bid farewell to Gen. Basbug at the exit of the Prime Ministry. The meeting was the longest farewell visit by a military chief to Erdogan. When they retired, Erdogan met with former Chief of General Staff Gen. Yasar Buyukanıt for 50 minutes and with former Chief of General Staff Gen. Hilmi Ozkok for half an hour.

Monday also saw a ceremony for the handing over of the post of 1st Army Corps commander from Gen. Hasan Igsız to Gen. Hayri Kıvrıkoglu, who was previously serving as the commander of the Aegean Army. Gen. Igsız, who was hoping to assume the post of land forces commander in accordance with the traditional military hierarchy, was at the center of a disagreement between the military and civilian wings of the Supreme Military Council (YAS) this year. Since he was not promoted to land forces commander as a result of Erdoğan's open refusal to approve his promotion due to his suspected involvement in a plot against the government, Gen. Igsız will now retire.

The outgoing general delivered a speech during the ceremony. “I do not know how it seems from outside, but when I look back I see a half century [as an officer] which makes me proud of myself and when I was able to preserve my self-respect by committing to my principles and truths. This is the biggest reward of my career. Now I am about to end my profession with the feeling of confidence that I fulfilled my duty,” he said.