Turkey's PM Erdogan and Spain's PM Rajoy spoke at the opening of a new Metro line in Turkey's capital, which a Spanish company helped building. 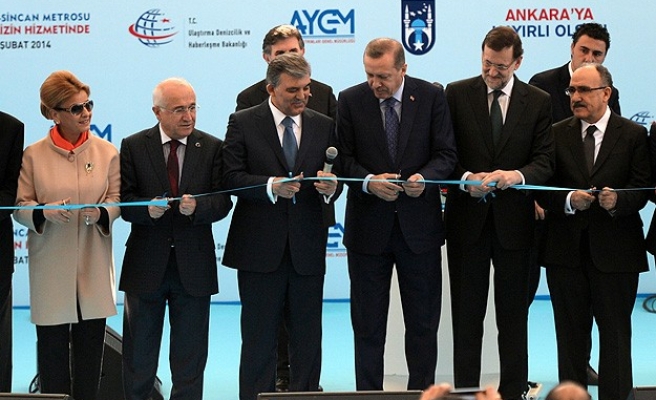 Turkey's Prime Minister Recep Tayyip Erdogan and Spain's Prime Minister Mariano Rajoy celebrated the opening of a new Metro line, which a Spanish company helped building, in Turkey's capital Ankara on Wednesday.
“Turkey and Spain are friends forever. I am very happy to see a joint project between Turkish and Spanish companies in Ankara,” said Rajoy.

The new subway line, which work began in February 2012, is 15.5 kilometers long and has 11 stations.

The line links two populous suburbs in the capital’s west and southwest and was originally opened in 2001 but taken over by the Transport Ministry in 2012 becuase of a lack of funding from the Ankara Municipality.

The mayor of Ankara Melih Gokcek said the project was finished with the help of Turkey's government initiative.

The mayor also said the construction of another line, linking another western suburb to the city centre, will be finished in coming months.

The Ankara Metro was put into operation in 1996. The total length of subway lines in Turkey's capital is 60.4 kilometers.