Turkish President Abdullah Gul, regarding the recent massacre in Egypt, said that Turkey's warnings should be received as help of a friend and not as poking up the internal affairs. 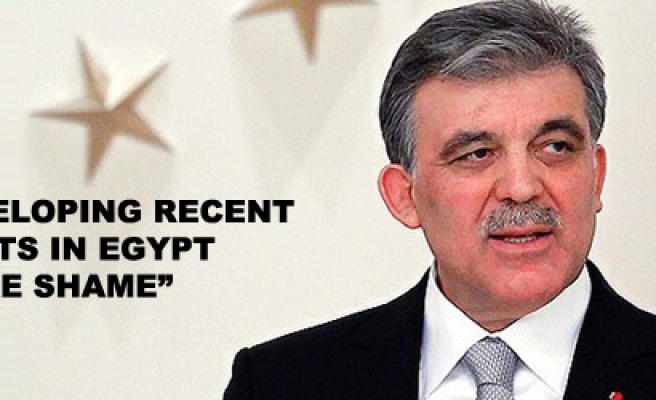 Turkish President Abdullah Gul has stated that Turkey's warnings should be received as help of a friend and notthe stiring of internal affairs, regarding the recent massacre in Egypt

Gul, Speaking in the 3rd summit meeting of the Cooperation Council of Turkic Speaking States in the city of Qebele, Azerbaijan, expressed that he openly felt sorrow for the Egyptions who passed away. Gul added, they advised on what should be done to avoid further confrontations and diminish the course of negative events taking place at the moment.

Gul continued “everybody wholeheartedly wants Egypt to come out of the chaotic situation its in at the moment”Gul countered the claims of Egyptian officials stating, Turkey was intervening within internal affairs of Egypt stating "Turkey's warnings should be received and perceived as help from a friend and not the stirring of internal affairs"

"All the recent incidents in Egypt are shameful on behalf of the Islamic and Arab world. I openly feel sorrow for all Egyptions who have passed away"

"Despite analyzing and expressing feelings regarding the current situation, there is a third point to argue which is,how is Egypt going to pull out of this current crisis?.It is important to help pull out Egypt from the current position its in. In this respect, we and the international community should help her," said Gul

"The people of Egypt have an important task and are key players of the current situation (to pull Egypt out of this crisis) . In this very critical stage they have to use common sense and be cold blooded. Otherwise, the mostprominent country of Middle East will get consumed with its people and its army going with it."

Thousands were injured during the violent dispersal of the two pro-Morsi sit-ins.

The move has sparked angry protests in provinces across the country, with deadly clashes being reported in several areas.