Second round of congress due as Turkey's CHP re-elects leader

The fiercest competition will be for the post of person responsible for overseeing local party organizations, which is considered the most prestigious seat in the party after party chairman. 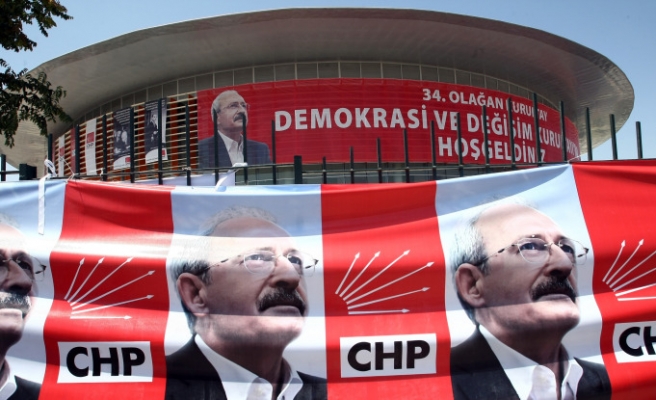 The main opposition Republican People's Party (CHP) renewed its frequently voiced commitment to change and democracy at its 34th ordinary congress, during which delegates of the party voted to re-elect Kemal Kılıçdaroğlu as chairman of the party.

Kılıçdaroğlu's re-election as CHP chairman was indeed no surprise as he was the sole candidate for the post. A total of 1,282 delegates cast votes in the election and 1,164 delegates voted in favor of the CHP leader. In a speech following his election, Kılıçdaroğlu spoke about transformation and change and thanked the delegates for re-electing him.

Kılıçdaroğlu arrived at the congress hall early on Tuesday accompanied by his wife Selvi amid applause from supporters of the party. The party chose the motto “Democracy and Change” for the congress.

“The CHP has gotten stronger after every congress. This will be the case for this congress, too,” he told reporters. The CHP chairman also delivered a speech before voting began and said his party would continue to defend change both within the party and in Turkey.

“Those who cherish the [existing] system will not be happy with change. … This has been the case throughout history,” he added. Kılıçdaroğlu's speech was frequently interrupted by party members shouting out, “Kemal, for prime minister.”

“They [opponents of change] strive for a continuation of their status quo. However, we have focused on change in order to protect the interests of our country and people,” the CHP leader exclaimed. His speech conveyed strong messages that targeted the government, about which he implied that the way the Justice and Development Party (AK Party) government ruled Turkey has led to disorder in several areas.

“One in every four of our young people is unemployed. Women are forced out of the labor force. Divorce is on the increase. We are number one in workers' deaths in Europe. Prisons are chock-full,” Kılıçdaroğlu lamented. The CHP leader also dismissed criticism of the fact that the congress was not held over a weekend, saying his party was ready to hold a congress anytime and under any condition.

The second round of the congress is schedule for Wednesday and will this time see delegates voting for candidates who wish to join the 60-member party council of the main opposition party. News reports claimed that around 600 candidates will vie for a seat on the council.

The fiercest competition will be for the post of person responsible for overseeing local party organizations, which is considered the most prestigious seat in the party after party chairman. There are rumors that a few candidates will vie for the post, including CHP Deputy Chairman Nihat Matkap, İstanbul deputy Gürsel Tekin and Denizli deputy Adnan Keskin. The party's Central Executive Board (MYK) and Higher Inspection Board (YDK) will be reshaped following this second round of voting on Wednesday.

Security measures were tight in and around the Ankara Arena Sports Hall, where the congress is being held, to prevent any incidents that might mar the event. The hall was decorated with Turkish and CHP flags as well as posters of Mustafa Kemal Atatürk, the founder of the Turkish Republic, and CHP Chairman Kılıçdaroğlu. There were also numerous banners within the hall which read “Turkey is our love,” “Hand in hand, shoulder to shoulder, CHP to power,” “Kemal is our leader, power is our objective” and “Order of pressure and oppression will end with the CHP in power.”

However, some party members carried signs bearing photos of Mustafa Balbay and Mehmet Haberal, two CHP deputies who are under arrest on coup and terrorism-related charges.

Several leading figures in the CHP, including the party's former leader Deniz Baykal, attended the congress. Also among the participants were former CHP Secretary-General Önder Sav, CHP Ankara mayoral candidate Murat Karayalçın, former CHP Deputy Chairman Hikmet Çetin and former leader of the party, Altan Öymen. However, some former and existing senior members of the CHP did not participate in the congress.

Representatives from the ruling AK Party were also at the congress hall to observe the event. AK Party Deputy Chairman Salih Kapusuz said to reporters: “We are not enemies. We are rivals. Rivalry is very important to us.”

The congress was also attended by a large number of artists, writers and academics who had been invited by the CHP administration. In addition, over 1,000 reporters and members of the media attended the congress.

The CHP's ex-chairman, Öymen, chaired the congress. He began by reading out a message from jailed CHP deputies Balbay and Haberal and expressed his wish for the release from prison of all deputies who are currently under arrest on various charges. Apart from Balbay and Haberal, there are seven other deputies in jail. They stand accused of terrorism-related and coup charges. Öymen added that many prisoners have been released from prison under a newly adopted judicial reform package, but a number of deputies still remain in jail.