Thousands march against PKK across Turkey 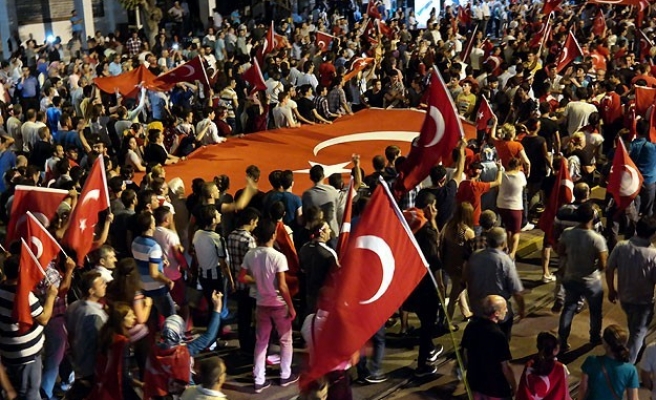 Turkey entered a second day of protests against the PKK’s terror campaign Tuesday as tens of thousands took to the streets.

Violence marred some demonstrations as protesters turned their anger against pro-Kurdish groups.

The protests - sparked after 16 soldiers were killed in a roadside bomb attack in Hakkari, southeast Turkey, Sunday - took place across the country and included cities such as Siirt and Batman in the Kurdish-majority southeast.

Crowds waving Turkish flags and chanting nationalist slogans descended on central squares to hear speakers condemn the violence that broke out at the end of July as the PKK abandoned a two-and-a-half year cease-fire.

In Corum, central Anatolia, around 3,000 marched and seven were injured, including two police officers, in clashes.

The pro-Kurdish Peoples’ Democratic Party (HDP) reported on Twitter that it's office in Ankara was attacked and set on fire while in the western city of Amasya, the party’s office were attacked during a protest by around 500 people.

In Samsun, a city on the Black Sea coast, a group of women were among hundreds who have reportedly volunteered for military service in the face of PKK attacks.

Since Sunday’s attack - the deadliest in the latest round of violence - 13 police officers have been killed in Igdir province, close to the border with Armenia.

Turkey has responded by launching airstrikes on PKK bases in northern Iraq and the army sent ground troops across the border Tuesday to track down those behind Sunday’s blast.