Turkey's National Security Council convened to discuss the recent PKK attacks on Turkish soil and the issue of a growing number of Syrian refugees crossing into Turkey every day. 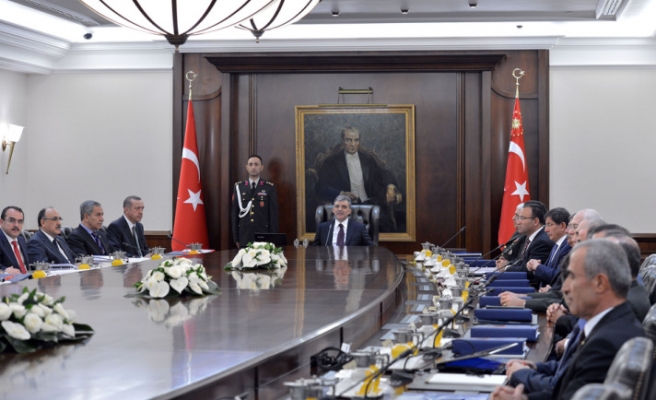 Turkey's National Security Council (MGK) convened on Tuesday to discuss the recent PKK attacks on Turkish soil and the issue of a growing number of Syrian refugees crossing into Turkey every day.

The meeting began at 1:30 p.m. at the Çankaya presidential palace under the chairmanship of President Abdullah Gül, who was temporarily discharged from the Hacettepe University hospital, where he is receiving medical treatment for a recurring ear problem, to attend the meeting.

A top agenda item is the increasing number of Syrians seeking refuge in Turkey due to heightened violence in Syria. Turkey has so far taken in more than 80,000 Syrians, and all nine Turkish refugee camps along the border are full. Until recently, newcomers were being housed in schools, dormitories or sports centers near the border while Turkish authorities scrambled to construct four new camps that will increase Turkey's capacity to100,000 refugees.

“The spike in the number of Syrian refuges places a huge burden on us. And this burden should be shared with the international community. The measures that should be taken in the face of a growing influx of refugees -- and I hope this does not happen -- should be reviewed,” Davutoğlu said at a press conference on Monday.

The issue will also be discussed at a UN Security Council meeting on Thursday.

The MGK meeting is also expected to discuss the development of new strategies to combat PKK violence on Turkish soil after the latest attack by the militant Kurdistan Workers' Party (PKK) in Gaziantep province, one of a series of violent incidents in the past few weeks.

Last week, a car bomb exploded near a police station in Gaziantep, a province close to Turkey's border with Syria. A total of nine people -- all civilians, and including four children -- were killed in the blast, and as many as 70 people were wounded. The blast was caused by the detonation of a cache of explosives loaded onto a truck parked near the Karşıyaka Police Department.

The attack in Gaziantep was followed by the killing of 15 PKK militants in Hakkari by Turkish security forces early on Monday. In addition, around 150 PKK militants were killed in Şemdinli, a district of Hakkari province, in July as part of large-scale military operations in the area.

Although PKK said it was not responsible for the blast, there is a growing body of evidence that the attack was carried out by the PKK. One of the suspects detained in connection with the blast is a senior official of the Kurdistan Communities Union (KCK), which encompasses the PKK.