Turkey calls on international community to act to stop massacre 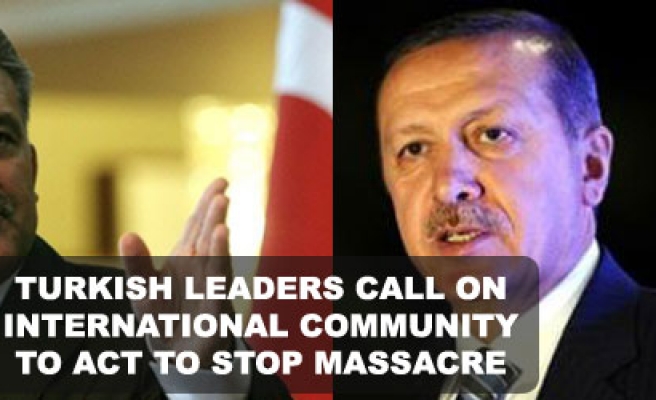 Turkish prime minister's press office called on the interim government in Egypt to cease the bloody attacks on its own people, to conduct a fair and transparent investigation over the perpetrators of massacre, to set free Mohamed Morsi and all political detainees and to begin a genuine and an inclusive transitional period.

"It is a grave crime that the police fired on peaceful pro-democracy demonstrators. Deaths since June 30 are the responsibility of the interim government which seized the democratic and civil administration through a military coup," the press office said.

Stating that the bloody attack of security forces to civilian and peaceful protestors sabotaged the intentions of hope for return to democracy of brother Egypt country, the office stressed.

"This intervention revealed how the current administration's manner on transition to democracy. It is a worry for the peace of Egyptian people. It can clearly be seen that the international community has supported the military coup and encouraged the current administration for the attacks on Wednesday by remaining silent in front of the previous massacres instead of making a claim to democracy in Egypt and constitutional legality. The international community, especially UN Security Council and Arab League should start to move to stop that massacre."

Gul expressed concerned that Egypt will sink into chaos if unrest continues in the country. He also called on Egyptian officials to release Morsi adding transparent and fair elections must be held immediately.

At least 163 people were killed and over 7,000 injured in the forcible dispersal of the two major pro-Morsi sit-ins in Cairo and Giza, sources said.

But Mohamed al-Beltagi, a leading figure of the Muslim Brotherhood and its Freedom and Justice Party, said more than 300 people had been killed in the dispersal of the sit-ins.

Supporters of Morsi have been camped out at Nahda Square and Rabaa al-Adawiya Square since he was ousted on July 3, demanding his reinstatement.

Gul was speaking at a press appearance in Istanbul prior to his departure for Azerbaijan where he is set to attend the 3rd summit meeting of the Cooperation Council of Turkic Speaking States.

Member countries of the Cooperation Council including Azerbaijan, Kazakhstan, Kyrgyzstan and Turkey will gather to discuss steps to be taken in the field of transport in the Azerbaijani city of Qebele, on August 15 and 16.

What is happening in Egypt quite the opposite ..First Muslim Brotherhood are not peaceful, but with Arms !!! They threaten the country and the people.. !! Army is too patient.. facing a terrorist group with Arms !! This is why all or the big big majority of Egyptians are AGAINST Muslim Brotherhood..and support the army and government.. !! It's a FACT.. It's the will of the Egyptians people..

what about taqseem square ...??????????? we are calling the western community to interfere in turkey because of taqseem massacre

Media has been at the camps 45 plus days roaming freely and there are no arms.the military were not allowing media during crackdown. they were shooting at media.the videos armed MB being spread around by pharaoh military regime of Egypt are cooked up with their civilian thugs.