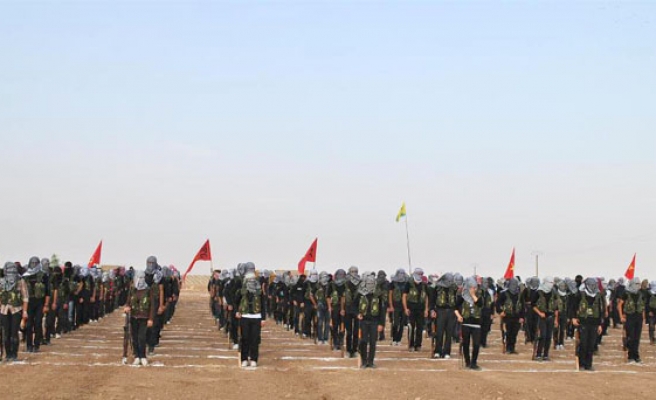 “What Ankara opposes is a PKK-led political entity and terror state that is now being sought out in northern Syria thanks to the misplaced support of the U.S., Russia and the [Bashar al-] Assad regime,” Ibrahim Kalin said in his weekly column in the Daily Sabah newspaper.

The Syrian PYD and its armed wing the YPG are both seen as terrorist organizations by the Turkish government and are affiliated to the PKK, which has waged an armed campaign in Turkey since 1984.

Supported by U.S. and, more recently, Russian air power, the YPG has made territorial gains along the Turkish border.

“What is happening is rather a de facto expansion of the PKK’s Syrian affiliate into the non-Kurdish areas of northern Syria,” Kalin said. “The PYD and YPG are known for human rights violations and, according to Amnesty International, have possibly committed war crimes by the ‘razing of villages’.”

In recent weeks, the Turkish military has shelled YPG positions in northern Syria in response to artillery fire from YPG forces based around Azaz in Aleppo province.

Turkey has also accuses the YPG of involvement in the Feb. 17 car bomb attack in Ankara that killed 29.

“The PKK feels emboldened by the support its Syrian branch receives in the so-called fight against Daesh,” Kalin added. “It uses the war in Syria to recruit new members and carry out attacks in Turkey.”

President Recep Tayyip Erdogan’s aide further criticized Washington and Moscow’s support for the PYD and YPG in Syria as “primarily serving the interests of Russia and the Assad regime.”

He added: “The reality is that the U.S. is using the YPG against Daesh, Russia is using it to support the Assad regime, and Assad is using it for his own survival and against Turkey.

“Everyone should make a clear distinction between the PYD and YPG and the Kurds of Syria and harbor no animosity for them. Just as the PKK does not represent Kurds in Turkey, the PYD is not the sole representative of Kurds of Syria.

“As a matter of fact, there are thousands of Kurds who do not share the PKK and PYD's ideology and take a dignified stance against the Assad regime.”

Kalin said world powers were turning the “so-called fight against Daesh into a disingenuous game of power whereby a constellation of proxy wars is waged in Syria and Iraq.”

He went on: “It is mindboggling as well as outrageous that we are now asked to quietly forget about the horrible crimes of the Assad regimes and its backers and turn a blind eye to more than 400,000 dead and millions of refugees all in the name of fighting Daesh.”

The U.S.’s links with the PYD have recently strained ties between Ankara and Washington with U.S. officials refusing to recognize the PYD or YPG as terrorist organizations and continuing to supply the group with weapons and training.