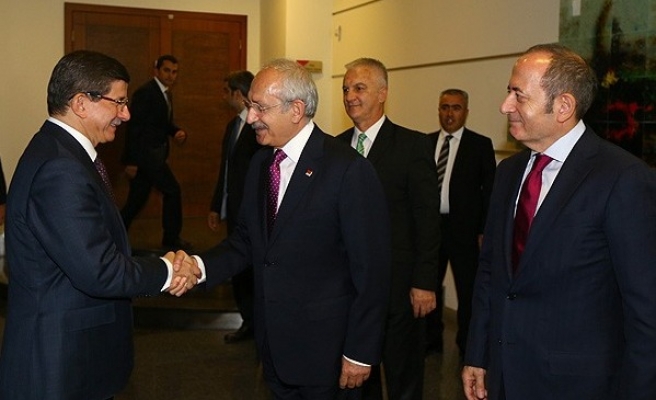 The leaders of the ruling Justice and Development Party (AKP) and the main opposition Republican People's Party (CHP) on Sunday agreed to speed up the efforts to shed light on Saturday’s twin bombings that rocked the Turkish capital Ankara, according to the Prime Minister’s Office.

The meeting between interim Prime Minister and AKP leader Ahmet Davutoglu and CHP chairman Kemal Kilicdaroglu came a day after two blasts -- thought to be carried out by suicide bombers -- targeted a peace rally, killing 95 people and wounding more than 240 in central Ankara.

The Prime Minister’s press office said the two leaders exchanged views on the ongoing investigation into the “heinous attack”.

"During the meeting, it was underlined that all terror acts should be condemned irrespective of their origin, purpose and target," said the press office in a statement.

It added that the two leaders emphasized "the importance of reaching a conclusion in ongoing efforts towards shedding light on all aspects of the terrorist act and bringing the perpetrators to account".

The statement also added the two leaders stressed adopting a common stance against acts of terrorism.

Kilicdaroglu, who held a press conference following his meeting with Davutoglu, said he urged the prime minister for the dismissal of the Ministers of Interior and Justice, Selami Altinok and Kenan Ipek, respectively.

During his press conference Kilicdaroglu said the two ministers were “not fit to sit in that chair”.

"I submitted this [dismissal] demand to Mr. Davutoglu and he said he handed over the matter to state inspectors and would take a stand according to their report," Kilicdaroglu told reporters.

"If they have respect for this nation, the people who were killed and their families, both ministers should leave office; they should do what it takes to shoulder the political liability," the CHP leader said.

Meanwhile, Davutoglu phoned the chairmen of Turkish Medical Association (TTB), Confederation of Public Sector Trade Unions (KESK) and Confederation of Revolutionary Trade Unions (DISK) -- among the organizers of Saturday's peace rally -- and offered his condolences over the attack, the Prime Ministry sources said.

"Those who lost their lives there are our brothers and citizens... and I have given every instruction for clarification of this incident," the Prime Minister was quoted as saying.

The same sources said Davutoglu also phoned chairman of the Union of Turkish Engineers and Architects (TMMOB) Mehmet Soganci, but adding that Soganci declined the call.

No-one has claimed responsibility for Saturday’s attack, which targeted a leftist rally calling for an end to the Kurdish conflict and political reform.

However, Prime Minister Davutoglu has suggested the PKK or ISIL were behind the blasts.

Davutoglu also said Saturday there were “very strong signs” the attack was carried out by two suicide bombers.

In the immediate aftermath of the attack Saturday, the Prime Minister issued a call on the chairmen of CHP and Nationalist Movement Party (MHP) for a meeting over the attack on Sunday. Devlet Bahceli refused the invitation.