In a visit to be made by Turkish Foreign Minister Ahmet Davutoglu to the north of Iraq on Wednesday, we will discuss not only Syria but Turkey's relations with the autonomous administration there," Arinc stressed. 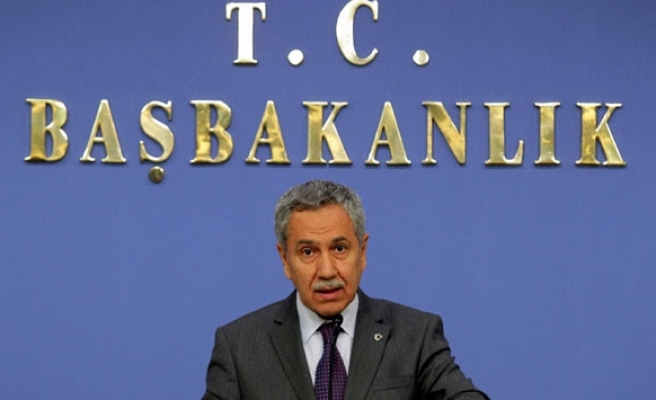 Turkish Deputy Prime Minister Bulent Arinc on Monday said that 9 critical pieces of a Turkish military jet was recovered from the seabed in the Mediterranean.

Speaking at a press conference following Monday's Council of Ministers meeting in Ankara, Arinc said that all 9 pieces were now studied by relevant units.

The first phase of activities to recover the pieces of our military jet will end at 24.00 hours on Tuesday, July 31, Arinc noted.

A Turkish military jet was downed by Syria on June 22 while on an unarmed mission in international air space.

"During Monday's meeting of the Council of Ministers, we discussed the relations between Turkey and Russia, and our relations with Syria. Turkish Prime Minister Recep Tayyip Erdogan provided information to us about his visits to Russia and Britain," Arinc indicated.

"Syria topped our agenda on Monday. We discussed the matter of Syria with all its details. In a visit to be made by Turkish Foreign Minister Ahmet Davutoglu to the north of Iraq on Wednesday, we will discuss not only Syria but Turkey's relations with the autonomous administration there," Arinc stressed.

"Ahmet Davutoglu on Monday provided information to the Turkish cabinet on Myanmar and the Turkish Finance Minister Mehmet Simsek made a presentation on the Turkish economy and developments in public finance," Arinc noted.

Asked about Ankara's views on arguments that a Kurdish state would be established in the north of Syria, Arinc said that Davutoglu's meeting with the head of the regional administration in north of Iraq, Massoud Barzani, would be very comprehensive.

"As heavy bombardment began in Aleppo in recent days and certain organizations have hoisted their flags in the north of Syria, Davutoglu's meeting in north of Iraq gained even more importance. Surely, the developments in north of Syria will be among the topics to be discussed by Davutoglu and Barzani. News reports suggesting the establishment of a separate state in north of Iraq should not be esteemed," Arinc stated.

"We need to follow-up on all issues related to Turkey's security. There are not only Kurds living in north of Syria but Arabs and Turkmens as well. Incidents that took place in north of Syria are separate ones and do not carry a strong political will. No matter how small issues may be, every issue is crucial for us," Arinc also said.