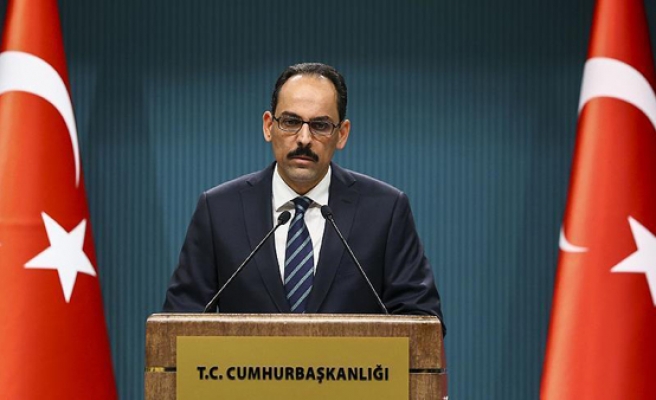 Writing in Turkey’s Daily Sabah newspaper Saturday, Ibrahim Kalin said: "Those who are supporting terrorist groups in the name of fighting ISIL are only contributing to an already-worsening situation."

He also said: "The YPG continues to manipulate the war in Syria to its advantage. In the name of fighting ISIL, it is acting as a client organization to the U.S., Russia and the regime of Syrian leader Bashar al-Assad regime at once."

Kalin also said with the help of Russian air support and U.S. supplies, the YPG had moved into Syrian opposition-controlled areas.

His comments come after a deadly blast in the Turkish capital of Ankara killed 28 people and wounded 81 others on Feb. 17.

"It is now established that the attack was carried out by the YPG. The suicide bomber Salih Necar entered Turkey in 2014 from the Hasakah-Qamishli region under the control of the PYD," wrote Kalin.

"Turkey has rightly reacted to the ongoing U.S. support to YPG," Kalin added.

"The anti-ISIL strategy is thus faced with a conundrum: While the YPG attacks the other opposition groups fighting against ISIL, ISIL remains as powerful and operational as before and the Assad regime gets stronger by the day," Kalin said.

The dynamics of the links between Turkey, the U.S. and Syrian Kurds has placed a strain on the relationship between Ankara and Washington.

The Obama administration has lauded Ankara's efforts in the fight against ISIL. But Turkey has recently pressed the U.S. on its support for the YPG and has even suggested the Americans choose between its NATO ally and a group Ankara considers a terrorist outfit.

"Even if ISIL is defeated, which is unlikely with the current strategy of attacking ISIL and letting the Assad regime get away with its war crimes, the war in Syria will not end because the Assad regime backed by Russia and Iran will continue to fight against the Syrian people.