Turkey the country that aided Ezidi minority most, AFAD 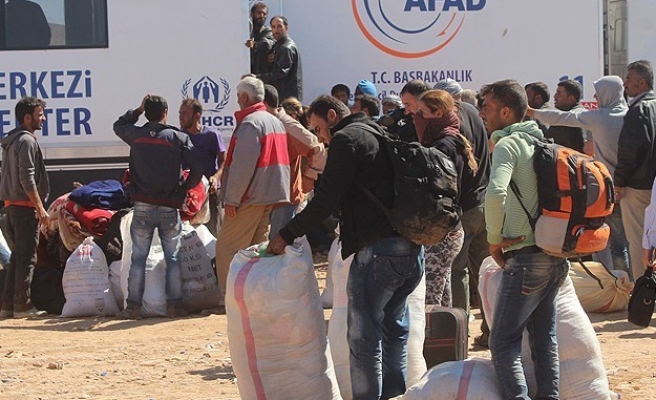 World Bulletin / News Desk
Turkey is the country that provided the Ezidi community, which is suffering at the hands of ISIL, with the most humanitarian assistance across the world, according to Turkish Prime Ministry Disaster and Emergency Management Presidency, or AFAD, on Monday.

Ezidis fled their homeland and sheltered in several countries, including Turkey, after the advance of the militant group ISIL on Mount Sinjar, in northwest Iraq near the border with Syria.

It has been home to thousands of Ezidis who had fled in fear of being massacred by ISIL militants in August 2014, who consider them "devil-worshippers."

Turkey, which aids destitute people regardless of their religion, language, race and sect, welcomed the Ezidis at camps set up in the Midyat and Nusaybin districts of the southeastern Turkish province of Mardin.

Fuat Oktay, the head of Turkey's emergency management authority, told The Anadolu Agency that the authority set up camps for 18,300 registered Ezidis.

"There is no other country other than Turkey that systematically and continuously provides assistance to Ezidis around the world," said Oktay.

Oktay said they set up camps for around 3,000 Ezidis in Midyat and about 17,000 in Nusaybin district and added that Turkey can host more Ezidis that need humanitarian aid.

The AFAD also set up camps outside Turkey in Iraqi Duhok city and its Zakho district, which Oktay said were fully equipped to meet the needs of the Ezidis there.

Turkey is helping everyone regardless of their being Turkmen, Kurdish, Arab, Sunni, Shia, Christian or Muslim, Oktay added.

Sinjar, which is home to many Ezidi Kurds, had been under ISIL control since Aug. 3, when the Peshmerga withdrew from the region.

Around 30,000 Ezidis fled to Mount Sinjar following the advance. Of this number, 20,000 have been transferred to the province of Dohuk through a safe corridor along the Syrian border.

ISIL's weeks-long siege of Mount Sinjar was broken on Dec. 20, 2014 after a successful operation of Iraqi Peshmerga, backed by the U.S.-led international coalition.