Turkey's Supreme Military Council meets to discuss the status of 11 generals and admirals, for whom arrest warrants have been issued under the Sledgehammer coup case. 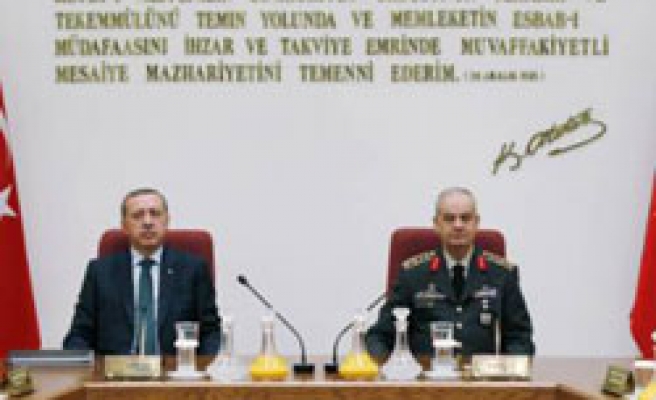 Capital Ankara had busy hours prior to the YAS gathering during which to discuss the status and actions to be taken regarding the 11 generals and admirals, for whom arrest warrants have been issued under the Sledgehammer coup case.

But none of the suspects has not surrendered to police yet for more than a week.

No promotion for suspects?

The Council convened to make a series of new appointments within the Turkish army and to assess retirements of several military members.

The status of the Turkish Armed Forces (TSK) personnel to retire or to be promoted to a higher rank will be discussed during the council's regular meeting.

Turkey's Chief of General Staff Gen. Ilker Basbug and Gendarmerie Forces Commander Gen. Atila Isik are reaching the end of their terms of office as of August 30, 2010. Accordingly, new names are expected to be appointed to the posts that will become vacant upon Basbug and Isik's retirement.

Turkish Land Forces Commander Gen. Isik Kosaner is expected to be assigned as Turkey's new General Staff Chief during the YAS meeting. If selected, Kosaner will carry out such post for 3 years.

During the gathering, new names will also be appointed as the head commanders of Turkish Land Forces and Gendarmerie Forces. On the other hand, Naval Forces Commander Admiral Esref Ugur Yigit and Air Forces Commander Gen. Hasan Aksay will carry on with their duties for one more year.

The decisions to be taken at the council meeting will be made public after they are presented to President Abdullah Gul on August 4.

Turkish media said, the arrest warrants will affect the appoinments of the Supreme Military Council (YAS) meeting, which is scheduled to be held in early August. Military officers whose names are mentioned in the document will not be eligible for promotion at this year's YAS meeting.