None of Sledgehammer coup suspects have complied to arrest warrants while 81 of 102 soldiers filed appeals at court. 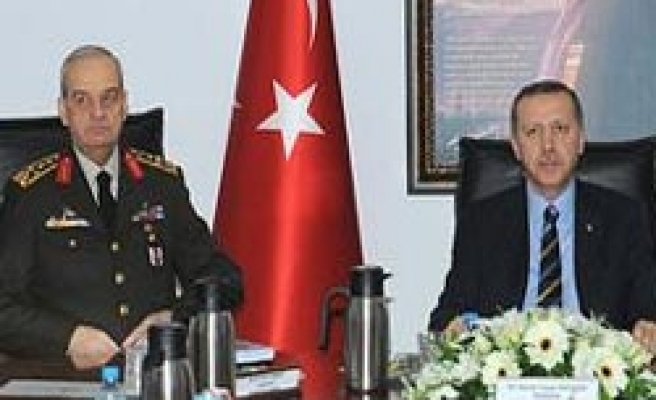 None of Sledgehammer coup suspects have complied to arrest warrants while 81 of 102 soldiers filed appeals at court.

The 10th High Criminal Court ordered the re-arrest of 102 suspects, including two former force commanders. The court earlier this week accepted the prosecution's indictment against the suspects.

Basbug unexpectedly met Erdogan at 23:30 pm as Turkey was talking about the arrest warrants

The two officials had a one-hour meeting. In another unexpected move, prior to his gathering with Basbug, Prime Minister Erdogan reportedly also called Justice Minister Sadullah Ergin, who was making a speech at a meeting in southern province of Hatay, to the Turkish capital.

Ergin cut short his speech and left the hall when his aide gave him a note. Erdogan is thought to have a meeting with Ergin until 2:30 a.m. following the meeting with Basbug.

Media said, Erdogan and Basbug's assessments on Sledgehammer operation and Article 35 were on the agenda of the prime minister's meeting with the justice minister.

Turkish media claimed, that Basbug expressed uneasiness about the arrest warrants issued even for commanders who are fighting terrorism and called "fugitive" in warrants.

Reports said, the arrest warrants will affect the appoinments of the Supreme Military Council (YAS) meeting, which is scheduled to be held in early August. Military officers whose names are mentioned in the document will not be eligible for promotion at this year's YAS meeting.