Recently, some media reports claimed that some officials from the Turkish National Security Organization (MIT) and Turkish Consulate General in Arbil are expected to attend the conference in Arbil 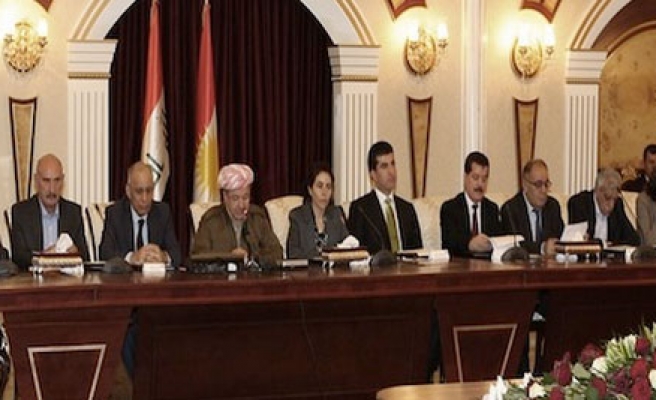 It has not been yet decided if Turkey is going to attend a grand Kurdish conference planned to take place in Arbil in late August that is expected to bring together major Kurdish political groups in the Middle East, Foreign Ministry spokesman Levent Gümrükçü told media on Tuesday.

Gümrükçü, speaking during a press conference at the ministry, told reporters that the upcoming Kurdish congress was discussed during a visit Nechirvan Barzani, the prime minister of Iraq’s Kurdistan Regional Government (KRG), paid to Turkey on July, 30 as Ankara expressed its expectations about the conference to Barzani first hand.

Recently, some media reports claimed that some officials from the Turkish National Security Organization (MIT) and Turkish Consulate General in Arbil are expected to attend the conference to brief Ankara about the issues on the table.

The spokesperson said Barzani had reassured Turkey on that no decision that might concern Ankara would be made during the conference.

Turkey has been wary of reports that Kurdish groups might make a call to create a united Kurdistan during the Kurdish congress.

The Iraqi Kurdish leader’s visit, during which Barzani had met with Prime Minister Recep Tayyip Erdoğan and Foreign Minister Ahmet Davutoğlu, followed a visit by Salih Muslim, the leader of the Democratic Union Party (PYD) in Syria with links to the Kurdistan Workers’ Party (PKK).

When asked if Muslim is expected to visit Turkey in the coming days, Gümrükçü said Muslim’s recent visit to Turkey was not the first. He added that both sides agreed on the continuation of talks. “No exact date, but we can easily say that talks are likely to continue,” added the Foreign Ministry spokesperson.

During Muslim’s visit, Ankara asked the PYD not to engage in any unilateral acts in the country’s north until an elected parliament is formed. However, Turkey acknowledged Syrian Kurds’ need to establish a “civilian administration” in the territories where they are active, just as other opposition groups have, provided that the administration does not gain “permanent status.”

Turkey, which has been conducting talks with the PKK to resolve the country’s decades-old Kurdish issue, thinks the establishment of a de facto Kurdish autonomous region in the northern part of Syria may not only pave the way for the breakup of Syria, but also has the potential to adversely affect the settlement negotiations with the PKK.

Gümrükçü also answered a question on the possibility of Syrian Kurds’ attendance at the Kurdish congress. He said the issue has been on Turkey’s agenda for a long time and that the issue was also discussed with members of main opposition group the Syrian National Coalition during Davutoğlu’s last visit to Arbil. “Our wish is the inclusion of Syrian Kurds to [this meeting],” the spokesperson said, adding that Turkey will do conciliatory contribution for this to happen.

Gümrükçü also announced during the press briefing that Iranian President Hassan Rohani, who took over the office from his predecessor, Mahmoud Ahmadinejad, in an inauguration ceremony at the weekend, might pay a visit to Turkey to meet with his Turkish counterpart, Abdullah Gül, and Prime Minister Recep Tayyip Erdoğan.

“There are no exact dates, but I can say that both sides are favorable to this [visit],” the spokesperson said.

Davutoğlu attended Rohani’s inauguration last Sunday, which brought officials from around 50 countries to the ceremony. The Turkish foreign minister also had a tête-à-tête with the new Iranian president on Monday.

Gümrükçü said Davutoğlu’s Iran visit was fruitful and that the foreign minister is not expected to pay a visit to any foreign countries in the coming days.

Turkey in close contact with all sides in Egypt

The Foreign Ministry spokesperson said Turkey has been continuing talks with different sides to resolve the political turmoil in Egypt, noting that the deposed President Mohammed Morsi and members of the Muslim Brotherhood should first be released to be able to end the crisis in the country.

Gümrükçü said that a new civilian roadmap, which will include all actors in Egyptian politics, should be drawn up. “Within this context, as Turkey we are in close contact with other international actors,” he said. “Turkey is exerting efforts for a return to democracy [in Egypt] by remaining in contact with all sides [in Egypt].”

The Foreign Ministry spokesperson also answered questions about Turkey’s stance on possible new sanctions on Iran by the United States. Noting that Turkey recognized binding resolutions by the UN Security Council, Gümrükçü said in other issues Ankara pursued policies based on its national interests. He said Turkey will continue contributing to peaceful solutions for Iran’s nuclear program.

Gümrükçü said an Iraqi official was missing in Turkey when responding to a question on reports that he was kidnapped.

According to reports, an adviser to Iraqi Minister of Tourism Bahaa al-Mayahi has been missing in Turkey for some time.

“We have the information, but it is too early to say he was kidnapped. We were told that [the official] has been missing for the past 12 days. We have no further information,”Gümrükçü told reporters, adding that Turkey was looking into the matter.

The official has been reportedly kidnapped for ransom, but no further information was available.