Erdogan said he would ask incoming prime minister Ahmet Davutoglu to form a new government on Thursday and a new cabinet of ministers would be announced the following day. 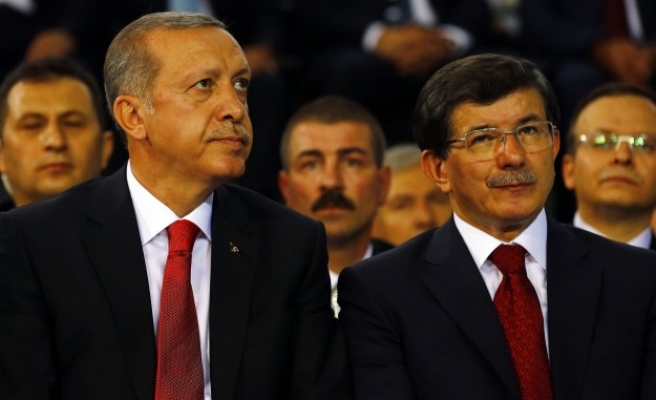 Ahmet Davutoglu was elected leader of Turkey's ruling AK Party on Wednesday in a televised ceremony, ahead of his expected appointment as prime minister on Thursday after Tayyip Erdogan is sworn in as president.

Outgoing Foreign Minister Davutoglu, who was the only candidate to replace Erdogan at the AKP congress in the capital Ankara, was elected with the votes of 1,382 delegates, the official announced. The remaining six votes were ruled invalid.

Turkish president-elect Recep Tayyip Erdogan said on Wednesday he would ask incoming prime minister Ahmet Davutoglu to form a new government on Thursday and a new cabinet of ministers would be announced the following day.

"God willing we will give Davutoglu the mandate to form the government tomorrow, and the new cabinet will be announced on Friday," Erdogan told a crowd of his ruling AK Party supporters ahead of a congress.

AKP members waved Turkish and party flags and cheered as Erdogan arrived at the hall. He greeted them and threw red carnations to the crowd as a song dedicated to him boomed out around the arena.

Around 40,000 AK Party members attends the congress which is followed by more than 900 journalists. Around 70 countries represented at the congress.

In a farewell speech to supporters of his AK Party, Erdogan said its mission to reshape the nation would go on after he left party politics and took office as head of state.

Erdogan said today was the birth of a new Turkey.

He dismissed suggestions that a new cabinet led by incoming prime minister Ahmet Davutoglu would be a "caretaker" government and he made clear its priorities would not deviate from the path he had set as premier.

"What is changing today is the form, not the essence. The mission which our party has assumed, the spirit of its cause, its goals and ideals are not changing," Erdogan said in his last speech as leader of the movement he co-founded 13 years ago.

Davutoglu took the podium to say Turkey needed a new constitution with a liberal character to replace a text born of a 1980 coup. "Erdogan's legacy is our honour and will be defended to the end," Davutoglu said in his speech.

"The presidency, our new government and political institution will continue a determined and courageous struggle against treachery in a parallel state and bureaucratic tutelage at the same time," Erdogan said.

Davutoglu said the two of them would serve together without discord.

Davutoglu also said membership of the European Union was a strategic target for Turkey and will be pursued decisively, adding the country's foreign policy would remain multi-faceted.

Davutoglu's role will be to continue many of Erdogan's policies, including the Kurdish peace process and the fight against the so-called "parallel structure," whilst delivering electoral success, according to Hatem Ete, director of the Ankara based think-tank, SETA.

"The most important item on his agenda will be to ensure that AK Party does not lose votes in this time, or better yet, increases its votes," Ete said.

Senior AK Party officials told Reuters they expected the core of the government to remain the same as the party focuses on winning a large enough electoral majority to amend the constitution in the new parliament, likely seeing power handed back to Erdogan as president.

"The main priority is of course to maintain the fundamenatal structures, but this government will be stronger with some new additions and it will contest the 2015 polls," one senior official said.

Erdogan on Wednesday extended an olive branch to the opponents in his farewell address at AK Party's first extraordinary congress to elect the new party chairman.

"We understand you, your historical background, lifestyle, values, demands and desires very well," he said adding "I extend my hand again on behalf of my party, my government and the movement I am the leader of," he said.

Erdogan in his address to the nation explained that he wanted the public to understand the trials and hardships the party has gone through to reach this point in history:

He claims the Gulen movement, allegedly led by U.S.-based congregation leader Fethullah Gulen, had infiltrated the Turkish state and attempted to overthrow the government.