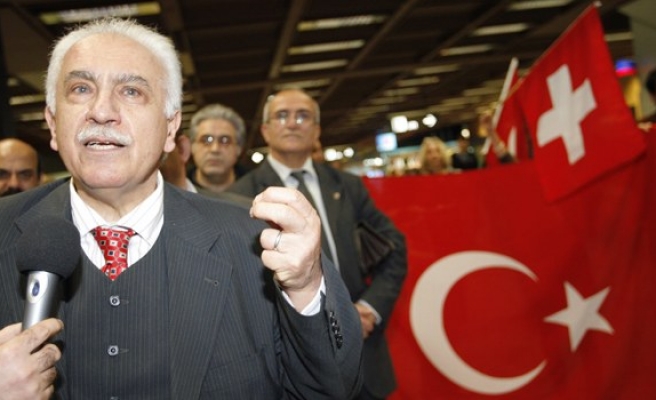 World Bulletin / News Desk
Turkey's Foreign Minister has backed the leader of a small Turkish political party accused by the Swiss authorities of racial discrimination over remarks made about the “Armenian 1915 incidents” issue in 2007.

Dogu Perincek, chairman of the nationalist Workers’ Party, is due to attend a European Court of Human Rights appeal hearing on Jan. 28 to defend Turkey's position on the claims of the incidents perpetrated against Armenians in 1915.

Speaking to reporters in Ankara on Friday, Foreign Minister Mevlut Cavusoglu said Turkey would defend its thesis in the best way possible.

"I hope he [Perincek] will be able to attend the appeal hearing," Cavusoglu said.

However, Perincek is currently prevented from leaving Turkey after being jailed in connection with the “Ergenekon” coup plot case.

"The process is in the [Turkish] Supreme Court's hands now," Cavusoglu added.

Perincek spoke at a conference in Switzerland in 2007 and denied that the incidents of 1915 involving Armenians constituted genocide. The Swiss authorities found him guilty of racial discrimination.

After the Swiss court’s decision, Perincek appealed to the European Court of Human Rights in 2008 in Strasbourg, arguing for “freedom of expression.”

In December 2013, the court ruled that Perincek should not have been found guilty of racial discrimination when he called the idea of an Armenian genocide an "international lie."

On a related issue, when asked about whether Turkey's Athens embassy is trying to prevent an expected protest today over the Armenia controversy by Turks in Greece, Cavusoglu said Turkish citizens had the democratic right to protest, therefore there would be no effort to prevent it.

"This also happened once again in France," Cavusoglu said. "Nobody has the right prevent these kinds of protests, we will support it."

Turks living in Athens are expected to hold a protest on Friday at 2.p.m. local time.

Cavusoglu also talked about the 7th Annual Ambassadors’ Conference in Ankara, saying the meeting was "very successful in terms of both quantity and quality."

"This year's conference hosted the biggest number of foreign guests in its history," Cavusoglu said.

Foreign ministers of the Netherlands, Argentina and Nigeria as well as the secretary-general of the Council of Europe, Thorbjorn Jagland, the director-general of UNESCO Irina Bokova and the UN High Commissioner for Refugees Antonio Guterres attended.

The next conference in 2016 will be held in Turkey’s Eskisehir province.