Turkish President Gul said he was pleased to see that there was an increasing consensus among political parties for a new constitution after the referendum. 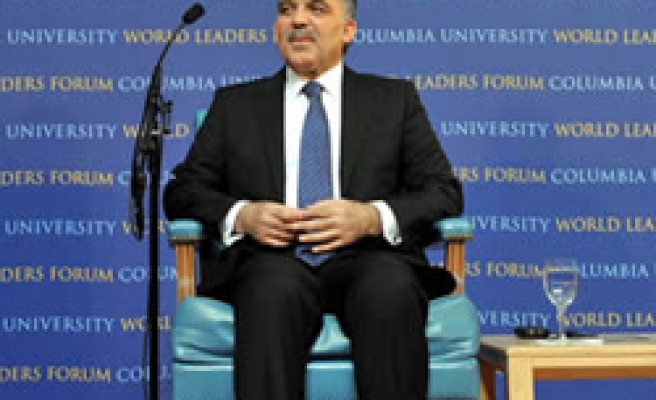 Turkish President Abdullah Gul said he was pleased to see that there was an increasing consensus among political parties for a new constitution after the referendum on September 12 on the constitutional amendment package.

President Gul attended the World Leaders Forum at the Columbia University in New York and delivered a speech "What Next? Turkey's Global Vision for a Prosperous Future".

Gul said that there has been an incredible progress about freedom of expression in Turkey, recently, while some critics say there were some to do to achieve this freedom.

"People are now able to talk about issues which were considered taboo five years ago. But I am not quite sure whether the world fully understood this progress in Turkey," Gul said.

Referring to the blocked access to some global sites, President Gul said, "I want to reiterate once again that it is not a censor. The problem stems from deficiencies in our tax laws. I have been encouraging both the government and the parliament to upgrade those laws."

President Gul recalled that significant constitutional amendments were made in Turkey 30 years after the military coup in 1980. "The constitutional amendment package received 'yes' votes from 58 percent of the population. The package was appreciated by many people including intellectuals, European Union commissioners, world leaders and jurists," he said.

"I am pleased to see that there is an increasing consensus among political parties for a new constitution after the referendum on September 12 on the constitutional amendment package. Turkey still needs to increase standards of its democracy. We have not done yet. Turkey wants to become a leading democracy in the world," he said.

He added that Turkey became the 16th biggest economy of the world after reaching an average annual growth rate of 7.5 percent in the last seven years.