Bahçeli said that his party has drafted a constitutional amendment to limit the immunities granted to parliamentary deputies, calling on lawmakers to discuss the proposal. 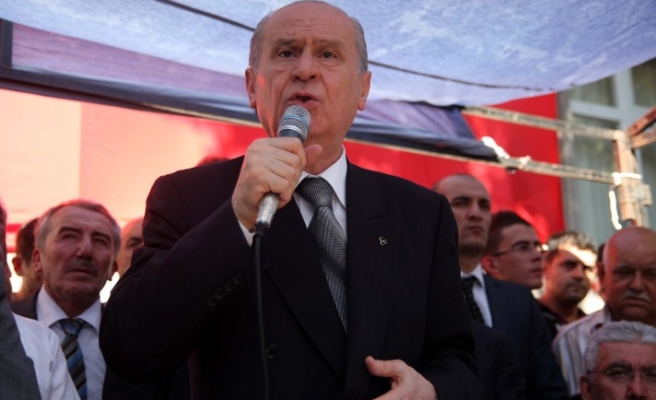 Nationalist Movement Party (MHP) leader Devlet Bahçeli said the limits of immunities granted to deputies should be “immediately revised” when commenting on a recent video that shows deputies from the pro-Kurdish Peace and Democracy Party (BDP) and a group of PKK militants from the outlawed Kurdistan Workers' Party (PKK) together during a meeting.

Bahçeli said in a written statement released on Sunday that his party has drafted a constitutional amendment to limit the immunities granted to parliamentary deputies, calling on lawmakers to discuss the proposal.

Article 83 of the existing Constitution states that a deputy who is alleged to have committed an offense before or after an election cannot be arrested, interrogated, detained or tried unless Parliament decides otherwise. The MHP proposal would make crimes concerning terrorism as an exception to this article.

BDP deputies driving in the province of Hakkari last week were stopped by a group of PKK militants as they entered Şemdinli, a district where the Turkish military has intensified its operations against the militant group over the past few months. The deputies, who have been accused of maintaining close ties to the PKK group, talked with the militants for at least half an hour, drawing anger from most segments of society as the entire meeting was filmed. At the end of their chat, BDP Co-Chairwoman Gülten Kışanak embraced the militants to say goodbye.

“It is obvious that those who are not ashamed to embrace those who have the blood of martyrs on their hands contribute to the crimes committed as much as their fellows in the mountains do,” Bahçeli said in reference to the BDP-PKK meeting.