Turkey’s press has reacted in different ways to the new democratization packet announced by Erdoğan on Monday. 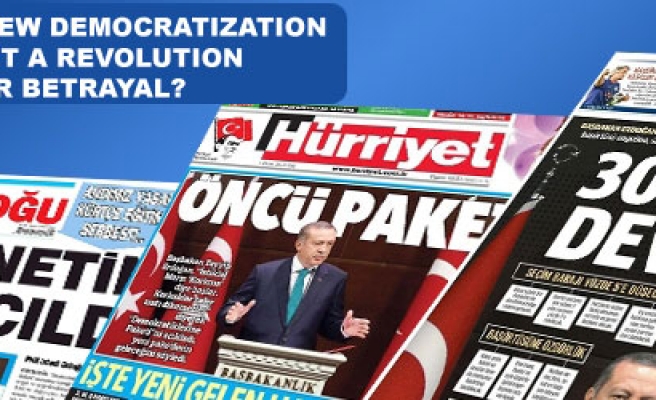 Turkey’s press has reacted in different ways to the new democratization packet announced by Turkish PM Recep Tayyip Erdoğan on Monday, with some calling it a revolution and others calling it a betrayal.

STAR says on its front page under the headline “30 September Revolution” that the election threshold would drop to 5 %, private schools could provide education in Kurdish language, a ban on headscarf in public works would be lifted and hate crimes would be harshly punished with the reforms introduced yesterday.

AKSAM quotes Prime Minister Erdogan as saying in his 1-hour long speech during which he revealed the reforms that the package would not be the final democratization step and Turkey was advancing in democracy.

“Pioneer Package” is HURRIYET’s headline to make its readers aware of the democracy reforms and it quotes PM Erdogan as reminding that the first line of Turkey’s national anthem started with the words “Don’t be afraid” and adding that “cowards could not erect a victory monument”.  It says that previously banned letters of Kurdish alphabet X,Y and Z can now be used, villages’ original names in Kurdish can be used, and new rights will be given to Alevi, Suryani (Syriac Christians) and Romani citizens. Hurriyet also says the political party membership conditions were eased and a legal protection on personal data was introduced with the latest reforms.

VATAN places the reactions from other political party leaders to the reforms on its front page, quoting Republican People’s Party (CHP) leader Kemal Kilicdaroglu as evaluating the package as a very incomplete one and not even one tenth of their suggestions were among the reforms announced. Nationalist Movement Party parliamentary group deputy leader Oktay Vural was quoted by the same daily as saying that it was obvious that the package was prepared under the terrorist organization PKK’s demands. On the other hand, Peace and Democracy Party deputy leader Gultan Kisanak said on the reformist package that none of their expectations were met and it had no capacity to remedy the bottleneck reached in the peace process, VATAN also says on the front page.

The packet contained many controversial measures including the legalization of political propaganda in languages other than Turkish, the lifting of the ban on headscarves which will pave the way for the ruling AK Party to enter a headscarf wearing woman into the parliament, and the removal of the decades old tradition of the student's oath in schools.

These measures have further demonstrated the increasing polarization in Turkish society, with nationalist groups calling it a betrayal of the Kemalist system imposed upon Turkey since its founding by Mustafa Kemal Ataturk. However, the conservative middle-class of Turkey, which has been growing in political influence in the 11 years that Erdoğan has been in power, has demonstrated support of the reforms.

Although the moves to integrate minority groups, like Turkey's Kurdish population into mainstream politics by lowering the minimum threshold of votes required to enter parliament from 10% to 5%, as well as the allowance of propaganda in the Kurdish language, the pro-Kurdish separatist Peace and Democracy Party (BDP) has said that the measures are not enough to secure this.