Turkey's prime minister said that the houses destroyed by the recent flood and landslide disaster in Black Sea province of Rize would be rebuilt by Turkey's housing authority in near future. 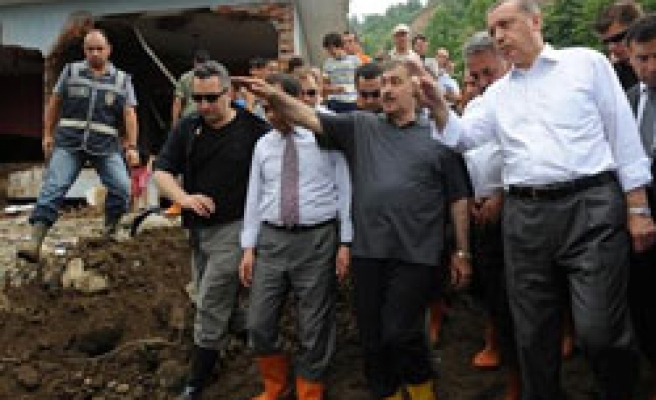 Turkey's prime minister said on Monday that the houses destroyed by the recent flood and landslide disaster in Black Sea province of Rize would be rebuilt by Turkey's housing authority in near future.

Paying a visit to Rize's Gundogdu hamlet, which has been recently hit by flood and landslide after heavy rains, Turkish Prime Minister Recep Tayyip Erdogan said the Housing Development Administration of Turkey (TOKI) would reconstruct the 31 collapsed buildings in the region in the next 6-8 months, moreover, the government would take a series of actions to cover the damages incurred by citizens and shop-owners due to the disaster.

Speaking to reporters, Erdogan said that the Turkish Red Crescent currently displayed intense efforts to help the victims of the disaster and experts carried out damage assessment activities in the region.

Erdogan noted that the government would also develop formulas to help the citizens and shopkeepers whose assets were damaged in the disaster.

The Turkish prime minister said Turkey's environment, transportation and public workds & housing ministries carried out joint activities for the fortification of bridges, streams and roads in the flood-hit region.

On Thursday evening, landslide and flood occurred in Gundogdu hamlet due to torrential rains, inundating many houses and a school building.

A total of 13 people died in the disaster, as 31 houses were totally demolished.

Over the past 81 years, floods killed a total of 585 people in the region, authorities said.